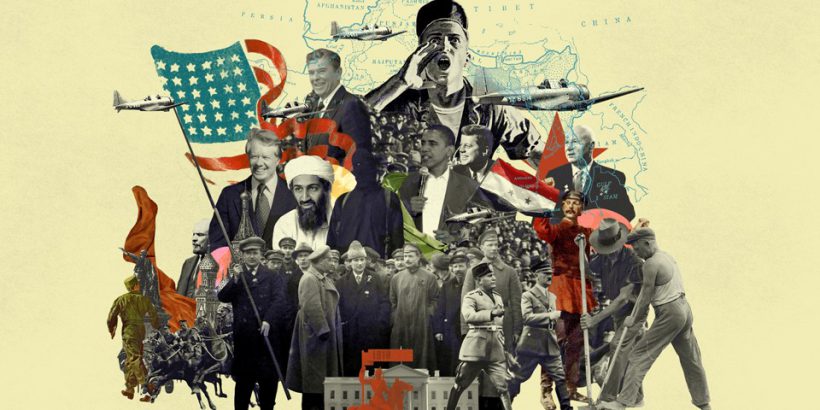 It isn’t enough for a commander in chief to invite friendly academics to dinner. The U.S. could avoid future disaster if policy makers started looking more to the past.

It is sometimes said that most Americans live in “the United States of Amnesia.” Less widely recognized is how many American policy makers live there too.

Speaking about his book Doomed to Succeed: The U.S.-Israel Relationship From Truman to Obama, the American diplomat Dennis Ross recently noted that “almost no administration’s leading figures know the history of what we have done in the Middle East.” Neither do they know the history of the region itself. In 2003, to take one example, when President George W. Bush chose to topple Saddam Hussein, he did not appear to fully appreciate either the difference between Sunni and Shiite Muslims or the significance of the fact that Saddam’s regime was led by a Sunni minority that had suppressed the Shiite majority. He failed to heed warnings that the predictable consequence of his actions would be a Shiite-dominated Baghdad beholden to the Shiite champion in the Middle East—Iran.

The problem is by no means limited to the Middle East or to Bush. President Obama’s inattention to the deep historical relationship between Russia and Ukraine led him to underestimate the risks of closer ties between Ukraine and Europe. “I don’t really even need George Kennan right now,” President Obama told The New Yorker for a January 2014 article, referring to the great Cold War–era diplomat and historian. By March, Russia had annexed Crimea.

To address this deficit, it is not enough for a president to invite friendly historians to dinner, as Obama has been known to do. Nor is it enough to appoint a court historian, as John F. Kennedy did with Arthur M. Schlesinger Jr. We urge the next president to establish a White House Council of Historical Advisers. Historians made similar recommendations to Presidents Carter and Reagan during their administrations, but nothing ever came of these proposals. Operationally, the Council of Historical Advisers would mirror the Council of Economic Advisers, established after World War II. A chair and two additional members would be appointed by the president to full-time positions, and respond to assignments from him or her. They would be supported by a small professional staff and would be part of the Executive Office of the President.

For too long, history has been disparaged as a “soft” subject by social scientists offering spurious certainty. We believe it is time for a new and rigorous “applied history”—an attempt to illuminate current challenges and choices by analyzing precedents and historical analogues. We not only want to see applied history incorporated into the Executive Office of the President, alongside economic expertise; we also want to see it developed as a discipline in its own right at American universities, beginning at our own. When people refer to “applied history” today, they are typically referring to training for archivists, museum curators, and the like. We have in mind a different sort of applied history, one that follows in the tradition of the modern historian Ernest May and the political scientist Richard Neustadt. Their 1986 book, Thinking in Time, provides the foundation on which we intend to build.

Mainstream historians take an event, phenomenon, or era and attempt to explain what happened. They sometimes say that they study the past “for its own sake.” Applied historians would take a current predicament and try to identify analogues in the past. Their ultimate goal would be to find clues about what is likely to happen, then suggest possible policy interventions and assess probable consequences. You might say that applied history is to mainstream history as medical practice is to biochemistry, or engineering is to physics. But those analogies are not quite right. In the realm of science, there is mutual respect between practitioners and theorists. In the realm of policy, by contrast, there is far too often mutual contempt between practitioners and academic historians. Applied history can try to remedy that.

Imagine that President obama had a Council of Historical Advisers today. What assignments could he give it?

Start with the issue that the president and his national-security team have been struggling with most: isis. Recent statements indicate that the administration tends to see isis as essentially a new version of al-Qaeda, and that a top goal of U.S. national-security policy is to decapitate it as al-Qaeda was decapitated with Osama bin Laden’s assassination. But history suggests that isis is quite different in structure from al-Qaeda and may even be a classic acephalous network. When we searched for historical analogues to isis, we came up with some 50 groups that were similarly brutal, fanatical, and purpose-driven, including the Bolsheviks of the Russian Revolution. By considering which characteristics of isis are most salient, a Council of Historical Advisers might narrow this list to the most relevant analogues. Study of these cases might dissuade the president from equating isis with its recent forerunner.

The U.S. government’s response to the 2008 financial crisis illustrates the value of this approach. That September saw the biggest shock to the world economy since the Great Depression. In a stroke of luck, the chairman of the Federal Reserve at the time, Ben Bernanke, was a student of earlier financial crises, particularly the Depression. As he wrote in his 2015 memoir, “The context of history proved invaluable.” Bernanke’s Fed acted decisively, using unprecedented tools that stretched—if not exceeded—the Fed’s legal powers, such as buying up mortgage-backed and Treasury securities in what was called quantitative easing. Bernanke’s knowledge of the Depression also informed the Fed’s efforts to backstop other central banks.

To be sure, historical analogies are easy to get wrong. “History is not, of course, a cookbook offering pretested recipes,” observed Henry Kissinger, the most influential modern practitioner of applied history. “It can illuminate the consequences of actions in comparable situations, yet each generation must discover for itself what situations are in fact comparable.” Amateur analogies were commonplace in the wake of September 11, ranging from President Bush’s invocation in his diary of Pearl Harbor to the parallels drawn by his administration between Saddam and the Axis leaders in World War II. To guard against such faulty parallels, May advised students and policy makers to follow a simple procedure: Put the comparison you are considering—for example, isis and the Bolsheviks—on a sheet of paper, draw a line down the page, and label one column “similar” and the other “different.” If you are unable to list three points of similarity and three of difference, you should consult a historian.

From Our September 2016 Issue

Try 2 FREE issues of The Atlantic

Were a Council of Historical Advisers in place today, it could consider precedents for numerous strategic problems. For example: As tensions increase between the U.S. and China in the South and East China Seas, are U.S. commitments to Japan, the Philippines, and other countries as dangerous to peace as the 1839 treaty governing Belgian neutrality, which became the casus belli between Britain and Germany in 1914?

The council might study whether a former president’s handling of another crisis could be applied to a current challenge (what would X have done?). Consider Obama’s decision to strike an imperfect deal to halt or at least delay Iran’s nuclear program, rather than bombing its uranium-enrichment plants, as Israeli Prime Minister Benjamin Netanyahu hoped he might. Obama’s deliberations have significant parallels with Kennedy’s decision during the Cuban missile crisis to strike a deal with Nikita Khrushchev, rather than invading Cuba or learning to live with Soviet missiles off Florida’s coast.

A president might also ask the council “what if?” questions. What if some action had not been taken, or a different action had been taken? (These questions are too seldom asked after a policy failure.) In this spirit, the next president could ask the council to replay 2013. What if Obama had enforced his “red line” against the Assad regime, rather than working with Russia to remove Syrian chemical weapons? Was this decision, as critics maintain, the biggest error of his presidency? Or was it, as he insists, one of his best calls?
Finally, the council might consider grand strategic questions, including perhaps the biggest one of all: Is the U.S. in decline? Can it surmount the challenges facing it, or will American power steadily erode in the decades ahead?

Both Hillary Clinton and Donald Trump offer answers to these questions. Indeed, Trump proposes to “make America great again,” implying that decline has already occurred, and to put “America first,” reviving a slogan with, to put it mildly, a problematic history. The presidential campaign thus far gives us little confidence that America’s history deficit is about to be closed.

We suggest that the charter for the future Council of Historical Advisers begin with Thucydides’s observation that “the events of future history … will be of the same nature—or nearly so—as the history of the past, so long as men are men.” Although applied historians will never be clairvoyants with unclouded crystal balls, we agree with Winston Churchill: “The longer you can look back, the farther you can look forward.”