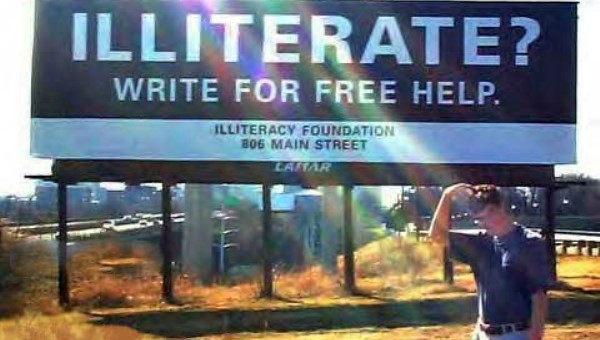 عفوا، هذه المدخلة موجودة فقط في الإنجليزية الأمريكية. For the sake of viewer convenience, the content is shown below in the alternative language. You may click the link to switch the active language.

The general definitions and terminology for illiteracy vary depending on their orientation to specific subject areas. Most people assume illiteracy pertains solely to those with the inability to read or write. However, those suffering from learning, cultural and scientific illiteracy are a different group all together. The coming generation of illiterate adults will be those who cannot unlearn, deschool or deprogram themselves from conventional thinking; It will be those who cannot free themselves from mainstream opinions and thought processes that require individuals to think outside the box or get rid of the box entirely.

Many conventional thinkers have problems letting go of the perceived reality they’ve set up for themselves to understand the world, regardless of its harm to themselves or others. We can no longer cast blame on controlling mechanisms in institutions or corporate culture which dictate our behavior on a daily basis. At some point, we must realize that every person is responsible for their own awareness regardless of what they have been taught by others.

IQ, college and university degrees, and actually all mainstream education only accounts for a small portion of a person’s success, and with higher education leading most graduates to minimum-wage employment, that portion is only decreasing every year. By far the majority of a person’s success is attributable to social well-being, emotional intelligence, and the ability to foster hope. In fact, according to a three-year longitudinal study out of the University of Manchester, hope “uniquely predicts objective academic achievement”, trumping general intelligence, previous academic achievement and personality.

Those with higher degrees of emotional intelligence have strong filters to the everyday brainwashing which is designed to indoctrinate weak minds. They are not as susceptible to neurolinguistic programming in schools, media, corporate culture, or societal influences. They have a greater capacity to think for themselves because they think more with their hearts and not their minds.

The True Meaning of Illiteracy

Education is not just the means of making you a degree holder; it is the gateway to the art of living. You can be culturally and socially illiterate about the world with the inability to think for yourself, yet still have a degree. Real education enables you to think, to discover the principles of life, and to accurately evaluate your experiences. Education gives you the ability to know the difference between what is achievable for the good of humanity and what is achievable for malevolent masters whose only desire is power and greed. Education empowers your strengths and allows you to excel in all the right areas that embrace your uniqueness.

Related reading: How This Simple Educational Model Can Change the World

Illiteracy in the coming decades will be restricted to those who have confined, conditioned minds; to those who…

These are the confined minds who can’t think outside the box they are in. They are so stuck in that box, that it takes a profound event to shake their reality so that they can at least see they’re inside a box. They will be the illiterate who we must help to deprogram if they are to ever survive the coming age. The visionaries and game changers of our world don’t even think inside or outside the box… they simply throw out the box and revolutionize the way we think about ourselves and our planet.

In 2011, a brilliant comment from an elementary school student hit home just as facilitators were gathering opinions and impressions about education. Commenting on what she thought about education and how it could be modified to teach children better, 11 year-old Julia Williams from a Grade 6 class said:

“I don’t like school because they take everything I’m good at and tell me I can’t do it anymore. I just want to once be able to do the things I’m good at like drawing and writing stories. I want to do it all day because I can think better than when I do stuff like math. Shouldn’t I be able to really like or even love what I do when I come here?They should help kids do what they know how to do best and I think the rest… I mean all the other subjects will just work out, and if they don’t, well… then they’re just not that important.”

For future generations to learn what society has become, why we have the problems we do in the world, and why adults never progress beyond many of their mistakes, it will be necessary to move out of the current educational paradigm and into a new one. This will involve a systematic deprogramming and deschooling of all children in developed nations.

In a sense, children are psychologically conditioned to fail and lose hope. Fear of failure breeds inaction and hopelessness. It’s a vicious cycle. When children lack hope, they will fear failure. When they fear failure, they will never act. They then take this formula with them and apply it in all instances of their lives. The result is that they never develop a positive mindset to hope for the best and that determines their reality. Only the strongest children who are empowered by their parents can break free from this slave mindset so prevalent in educational institutions.

Deschooling takes children out of schools, but, unlike a lot of home-school approaches, it doesn’t import the classroom into the home. It does away altogether with educational clutter such as curricula and grades.

Deschoolers maintain that a child’s learning should be curiosity-driven rather than dictated by teachers and textbooks, and that forcing kids to adhere to curricula quashes their natural inclination to explore and ask questions.

Deschooled children can organize their knowledge in free and better ways. They never need to feel they are through learning, or past the point that they can begin something new. Each thing they discover can be useful eventually. If we help provide them with ever-changing opportunities to see, hear, smell, taste, feel, move and discuss, what they know will exceed in breadth and depth what any school’s curriculum would have covered. It won’t be the same set of materials — it will be clearer and larger but different.

Related reading: Why Every Parent Should Consider Unschooling

It is the deschooled generation who will have the least chances of illiteracy in the future. They will have expanded minds, embracing concepts that are impossible for limited minds to comprehend. They are our future leaders and visionaries who will pave the path for a new earth. And it’s coming soon.

Marco Torres is a research specialist, writer and consumer advocate for healthy lifestyles. He holds degrees in Public Health and Environmental Science, and is a professional speaker on topics such as disease prevention, environmental toxins and health policy.