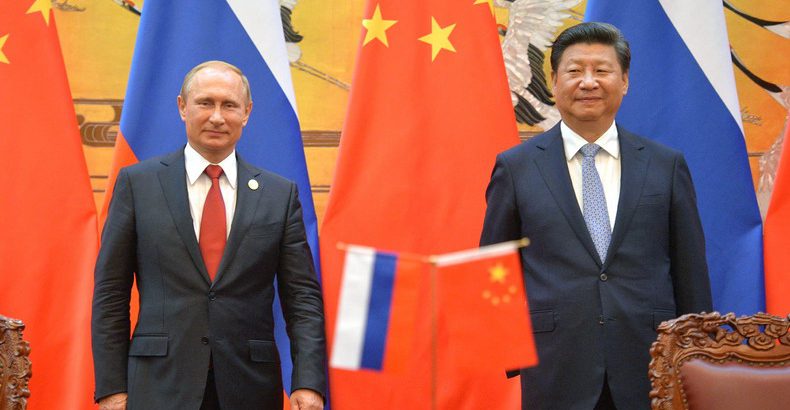 How the 19th century Concert of Europe helps shed light on the emerging China-Russia axis.

Last week Chinese media announced that Vladimir Putin would be the guest of honor when China hosts the G20 summit in Hangzhou on September 4. This is yet more evidence that the friendship between Xi Jinping and Vladimir Putin is as vibrant as ever. There is good reason for such comradery: Putin and Xi know that they will be dealing with each other for at least another six years and, quite possibly, for much longer than that. Putin’s second term in office doesn’t end until 2024, whereas Xi is slated to remain in power until the end of 2022. Furthermore, there has recently been much speculation that Xi will stay in office after his term expires. As for Putin, the lessons of his switcheroo with Dmitry Medvedev in 2008 teach us that the transfer of power in Russia rarely happens willingly.

Thus, the shadow of the future for Xi and Putin is extremely long and gives them added incentive to work cooperatively with each other. There have been examples of close friendships among leaders in recent history: Roosevelt and Churchill, Reagan and Thatcher, Kohl and Mitterrand, etc. However, there have not been many instances of authoritarian leaders of two great powers becoming chums. On the contrary, they are usually either enemies (Saddam Hussein and Ayatollah Khomeini, Stalin and Tito), frenemies (Mao Zedong and Stalin), or not of equal status (Hitler and Mussolini).

In fact, to find a historical analogy to Putin and Xi we would have to go back to the 19th century, when rulers had lifetime appointments to office and power was more equally distributed in the international system. The Concert of Europe, buoyed by a Russia-Austria-Prussia alliance and devised by Austrian diplomat Klemens von Metternich, maintained a peace that lasted for 33 years, from the end of the Napoleonic wars in 1815 to the revolutions of 1848. It was also a highly reactionary arrangement, the main goal of which was to restrain the revolutionary fervor stemming from the French revolution of 1789, to suppress nationalism, and to maintain absolute monarchies in the Russian, Austrian, and Prussian empires. Most important for the purposes of this article, the Metternich system was successful largely due to the long reigns of Francis I of Austria (1792-1835, ruling first the Holy Roman Empire then the Austrian Empire), Frederick William III of Prussia (1797-1840), and two Russian czars – Alexander I (1801-1825) and his brother Nicholas I (1825-1855).

A Concert to Quiet the Cacophony of Revolution

The 1815 Congress of Vienna (which established the Concert of Europe) is often compared to the Versailles Conference of 1918 or the Potsdam Conference of 1945, as all three followed a hegemonic war which had a clear victor. All three conferences established a new, post-bellum world order. But whereas Versailles and Potsdam each brought empires to an end, the Congress of Vienna aimed to prolong its monarchies. As a result, the Bourbon monarchy was reestablished in France, the kingdom of Prussia and the Austrian empire got a new lease on life, and England remained a highly restrictive democracy until the Reform Act of 1832. The ancien regime struck back.

Klemens von Metternich played a key role in forming a system that was based as much on traditional social values as it was on maintaining an intricate balance of power between European powers. At the center of this system was what came to be known as the “Holy Alliance,” a personal agreement between the Russian, Prussian, and Austrian monarchs with the expressed intent of preserving Christian social values and traditional monarchism. In fact, the rulers of the three countries became so close that Russian Czar Nicholas I often referred to William Frederick III of Prussia as “his father,” while Austria’s Francis I, on the precipice of death, instructed his weak-minded son Ferdinand to follow Metternich and Nicholas I in every way possible. Ferdinand I obeyed his father’s wishes and left Chancellor Metternich in charge of most affairs of state until 1848.

I am not the first to compare Vladimir Putin with Nicholas I, but the similarities between the two have become more and more apparent in recent years. Even Nicholas’s motto –“Orthodoxy, Autocracy, and Nationality” — clearly resembles Putin’s emphasis on patriotism, power, and statism. Both rulers put geopolitics ahead of economics, both elevated the Russian Orthodox Church, both sought to postpone necessary domestic reforms, and both emphasized military power as the most important component of statecraft. Moreover, both have actively intervened in conflicts to support their authoritarian allies. In fact, it’s entirely possible that the revolutions of 1848 would have toppled the monarchies of Austria and Prussia if it wasn’t for determined intervention by the Russian czar. Lastly, Vladimir Putin may eventually enjoy the same amount of time in power as did Nicholas I – 30 years at the helm.

The nature of the Russian state under Vladimir Putin and Nicholas I are also shockingly similar. The French traveler, Marquis de Custine, inspired by Alexis de Tocqueville’s overview of America in the early 1830s, traveled to Russia in 1839. His descriptions of Russian culture at that time have resonated through the centuries to such an extent that George F. Kennan wrote a book on the similarities between the USSR and de Custine’s Russia. This remains true in 2016.

It is substantially more difficult to compare modern China with either Prussia or Austria of the 19th century. Nonetheless, it’s possible to see how Moscow’s perception of China today is similar to St. Petersburg’s perception of Austria-Prussia 200 years ago. A common adversary (France in the 19th century, the United States today) helps to unite the two partners; the two share similar economic systems (feudalism in the case of Russia-Prussia-Austria, state-driven capitalism for Russia-China); a long, contentious border separates the two powers and they squabble over control of the states in between (Poland/Ukraine then, Mongolia/Kazakhstan now). Finally, the two states view themselves as “great powers” and demand respect in the international arena which causes consternation in the liberal states to the West (Great Britain in the 19th century; the United States and Western Europe in the 21st).

The Concert of Eurasia?

First of all, we should expect that Moscow and Beijing will work to support other autocrats and to limit the spread of democracy. As such, Russia’s intervention in Syria on behalf of Bashar al-Assad and the rapprochement between Moscow and Pyongyang are entirely predictable developments. Keep an eye on Kazakhstan and Uzbekistan, where the aging Islam Karimov and Nursultan Nazarbaev will soon leave the political scene. Moscow and Beijing will do everything to make sure that democracy doesn’t emerge in those Central Asian states.

Secondly, Moscow and Beijing will continue to cast themselves as protectors of “traditional” values juxtaposed with the “decadent” West. Such a message resonates with domestic populations in both Russia and China.

Third, expect Putin and Xi to establish more institutions that bind Russia and China to each other. This may mean more bilateral commissions and, perhaps, a larger role for the Shanghai Cooperation Organization (SCO). The integration of the Eurasian Economic Union and the “One Belt, One Road” initiative also merits close monitoring.

The next president of the United States should be prepared to defend fledgling democratic developments in states such as Myanmar and Vietnam, because Washington can be certain that Putin and Xi will work hard to keep their autocratic governments in power.

Gregory Shtraks is a PhD candidate at the University of Washington, where he is writing a dissertation on Sino-Russian relations.