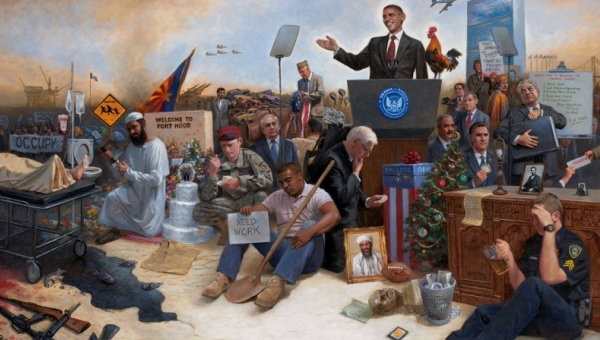 America has to wake up to the new normal.

On both sides of the Atlantic, Britain’s vote to leave the European Union has triggered anguished hand wringing, and gnashing of teeth, among foreign policy elites who believe that Brexit heralds the end of the post-1945 liberal international order. For sure, the powerful domestic forces welling up in Europe and the United States—a populist backlash against the elite-driven globalization project—are undermining support for liberal internationalism. But the liberal international order has been wobbling for some time for more fundamental reasons.

What foreign policy experts call the liberal international order is, in fact, the Pax Americana, which was constructed after 1945, and rested on the foundation of preponderant U.S. power. In 1945—America’s first unipolar moment—the United States accounted for half of the world’s manufacturing output, controlled two-thirds of the world’s gold and currency reserves, and possessed powerful global power projection capabilities. And the United States had a monopoly of atomic weapons. It this combination overwhelming of military, financial and economic muscle that enabled it create the security and economic institutions—the United Nations, NATO, the World Bank, the International Monetary Fund, the World Trade Organization—that underpinned the postwar order (and still do), rebuild the shattered economies of western Europe and Japan, and to play a pacifying and stabilizing role in Europe and East Asia.

As scholars of international politics would say, following World War II, the United States was in a position of primacy, or hegemony. Even during the Cold War, U.S. dominance was never seriously challenged. Lacking the economic and technological capabilities to close the power gap with the United States, the Soviet Union was more a Potemkin superpower than a real one. The Soviet collapse in 1989–91 left the U.S. more ascendant geopolitically than ever, and caused febrile minds to believe—“the end of history”—that the liberal international order had become a permanent feature of international politics.

We now know this vision was illusory. The liberal international order is fraying because the global balance of power is shifting, and the foundation of U.S. power on which the Pax Americana was built is cracking. In fact, America’s edge in relative power has been declining since the 1960s. The implications of this were masked because, in the 1960s, 1970s and 1980s, the U.S. advantage was being whittled down by its allies in Europe and Japan (although in the 1980s, Japan’s economic gains provoked—a false—alarm that Tokyo was going to displace the United States as the world’s leading power). The Soviet Union’s dramatic collapse also shielded from view the macrohistorical forces that already were eating away at the foundations of American power.

Some analysts—notably David Calleo, Robert Gilpin and Paul Kennedy—did grasp the nature of the geoeconomic transformation that was taking shape. Kennedy’s blockbuster 1987 book, The Rise and Fall of the Great Powers, catalyzed a debate about the relative decline of American power. He made two key points. First, since the beginning of the modern international system (1500) all great powers have experienced a similar life cycle: they emerge, rise, reach the apogee of their power and then experience relative decline. Second, therefore, no great power—not even the most dominant—has been able to remain Number One forever. Kennedy’s claim that the United States was not exempt from this process of great power rise and decline caused a furor among the U.S. foreign-policy establishment The ensuing debate about U.S. decline that Kennedy sparked ended abruptly ended abruptly, however, when the Soviet Union (America’s geopolitical rival) collapsed, and when Japan (the chief U.S. economic rival) experienced the bursting of its economic bubble.

For sure, China today is hitting some speed bumps economically, and faces other headwinds such as an aging population and environmental degradation. Nor, in many respects, has China’s economy caught up with the United States in qualitative metrics of economic and technological power. But it is narrowing the gap. Already, China’s economic emergence is transforming the geopolitical balance between itself and the United States. This is why the handwriting is on the wall for the liberal international order. China (and others) are rising, and America’s relative power is declining. This is part of a bigger picture: the fulcrum of global power is moving away from the Euro-Atlantic world to Asia, a power transition that is being driven being driven by the big, impersonal forces of historical change.

The English scholar E. H. Carr understood the dynamics that are causing the U.S.-led liberal international order to wobble. In his classic study of interwar international relations, The Twenty Years’ Crisis, Carr demonstrated that geopolitical crisis of 1930s was caused by the growing gap between the international order established by the Versailles Treaty after World War I, and ensuing changes in the actual distribution of power in Europe. He made two key geopolitical points. First, international orders reflect the balance of power that existed at their creation, and the interests of the dominant power(s) that created them. Second, international orders never outlast major changes in the balance of power that existed when they were created. Carr warned that fast-rising challengers and declining defenders of the status quo are on a collision course. The state(s) that created the prevailing international order love the status quo because it privileges their interests. Rising challengers, however, have no attachment to the existing order, and they seek to revise it to gain the prestige, status and geopolitical prerequisites commensurate with their growing power.

The most insightful defenders of the liberal international order—G. John Ikenberry is a good example—acknowledge that the era of American primacy is coming to a close. However, for two reasons, they claim the United States can cling to a kind of zombie hegemony where the rules, norms, and institutions embodied in Pax Americana can outlive the decline in U.S. power. First, they claim that the international order is “rules-based” and that all states that join benefit. This overlooks a vital point: in international politics, who rules makes the rules. Certainly, the benefits of post-1945 international order were distributed widely. However, it was the United States that gained the most, which is exactly what Washington intended when it designed the postwar system.

Second, it is claimed that China will not challenge or overturn the liberal international order, because it rose geopolitically and economically within that system. China, indeed, has risen within the Pax Americana but it has not emerged as a great power for the purpose of preserving it. An increasingly powerful China will do what rising challengers invariably do: it will seek to remake the international order to reflect its own interests, norms and values—not those of the United States.

Were he alive today, Carr would not be surprised that in East Asia, China is challenging the Pax Americana by pursuing its own claims for regional dominance. Similarly, in eastern Europe, Carr would understand why Moscow is trying to reassert its sway in places that—going back to czarist times—were part of Russia’s sphere of influence. And he would understand why China and other emerging powers are attempting to revamp international institutions and rules by aligning them with emerging power realities, and by constructing an alternative international order that exists parallel to the Pax Americana. The United States needs to adjust to the reality that the balance of forces that underpinned the liberal international order is withering. If it fails to do so, and instead tries rigidly to uphold the fading post-1945 status quo, it risks accelerated relative economic decline at home, and major conflict abroad.

This is the eleventh in a series of essays on the future of American primacy. You can read the previous essay, “Why Primacy Is a Bad Strategy for America” by Harvey M. Sapolsky, here.