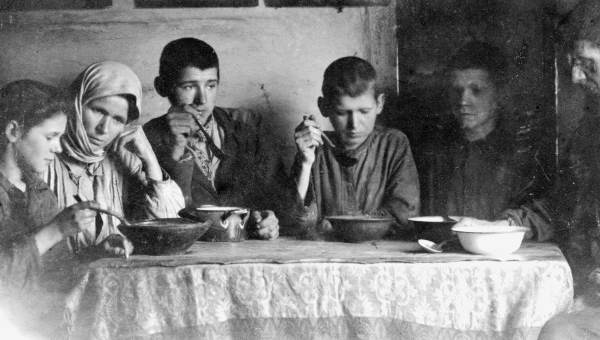 The Ukrainians call it the Holodomor – the extermination (mor) by starvation (holod) of four million of their countrymen in 1932-33. Nowhere else in the USSR was the famine of those years so terrible. Four-fifths of its victims were Ukrainian. Most of them were peasant farmers who had been stripped of everything, their land and livestock, when Stalin’s regime herded them into large, collective farms. It then requisitioned grain from them, taking their last stocks of seed and food until they starved. The peasants would eat anything – thatch, bark, moss, cats and dogs – before lying down to die. Some went mad and ate their own children. Mothers abandoned their babies and tried to flee. The roads were littered with corpses.

Image: Photograph of a Ukrainian family from April 1933, captioned “300 days without a piece of bread”. The photographer later died in the gulag where he was sent as punishment for documenting the famine Credit: Z arkhiviv VUChK GPU NKVD KGB