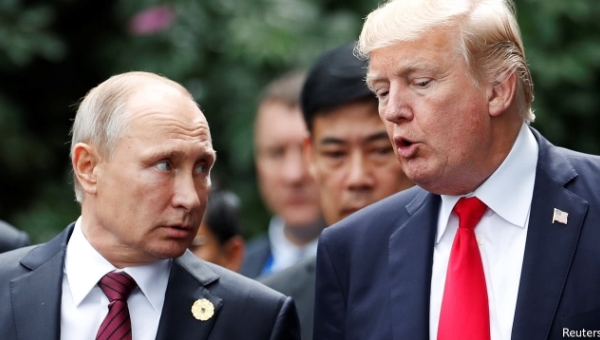 The personal sanctions against regime cronies are especially tough

LAST January, shortly after Donald Trump was sworn in as America’s president, telephones started to ring in several Senate offices. The White House, staffers learned, was drafting an executive order to lift some of the sanctions imposed on Russia in response to its war against Ukraine in 2014. “We were horrified. Everyone was calling each other and we soon realised that all heard the same thing,” one recalls.

The staffers promptly leaked the rumour, and began work on a bill to turn the sanctions, imposed by executive order under Barack Obama, into law. The idea was to stop Mr Trump from lifting them unilaterally. Although the earlier sanctions were related to the Russian invasion of Ukraine, it was evidence of Russia’s meddling in America’s elections, not to mention Mr Trump’s worryingly consistent praise of Vladimir Putin, Russia’s president, that propelled Congress into action. The result was the Counter America’s Adversaries Through Sanctions Act (CAATSA, which also includes measures against Iran and North Korea), the only piece of legislation to be almost unanimously supported by both parties in Congress. Passed by 419-3 in the House and 98-2 in the Senate, it left Mr Trump with no choice but to sign or have his veto overridden.

The new law, signed in August, entrenches and in places tightens the sanctions of 2014, which have cut off Russian firms from most Western sources of financing. Economically, they compounded the effects of the oil-price collapse on Russia’s economy in 2014 and have hampered Russia’s ability to climb out of the trough. Uncertainty about their scope has made foreigners cautious about dealing with any Russian firm, not just with those directly targeted. Foreign direct investment in Russia fell from $69bn in 2013 to just $6.8bn in 2015. Yet with time, businesses adjusted to the new conditions. Western executives gradually returned to Russian gatherings. Foreign investors again gobbled up Russian government bonds.

As well as stopping Mr Trump from backsliding, CAATSA moderately increases the pressure on the Russian economy. It extends the restrictions on investing in new Russian oil and gas projects to the operations of Russian firms in third countries. Yet the effectiveness of these new sanctions, which the administration is allowed to pause until late January, is undermined by the fact that European firms have been ring-fenced from their effects. Gazprom, Russia’s natural-gas giant, which supplies Europe with a huge amount of gas, has also been excluded from the sanctions lists, as is Nord Stream 2, a second trans-Baltic gas export pipeline to Germany. Some American officials would have liked to see that project blocked, but the desire to preserve unity between America and the EU turned out to be more important, says Daniel Fried, a former US official who designed the initial sanctions.

America and Europe did not want to fall out over arms sales, either. CAATSA extends existing sanctions to make sure that anyone engaged in a “significant transaction” with the Russian defence and security sectors can be affected. But as the world’s second-largest exporter of arms, Russia supplies many of America’s friends, including India, Vietnam and Iraq, as well as some NATO members including Turkey, Greece and some former Warsaw Pact members in eastern Europe. So decisions on applying sanctions to Russian arms sales will also be made case by case.

It is the personal sanctions that worry the Russian elite most. CAATSA allows “secondary sanctions”, meaning that American officials can go after anyone, in any country, with significant business dealings with the so-called “specially designated nationals” (SDNs) who are already under sanctions—such as Igor Sechin, the head of Rosneft, the state oil firm, and Gennady Timchenko, an oligarch with interests in transport and energy. Depending on how CAATSA is implemented, this could make some of Mr Putin’s closest allies and cronies as toxic as other SDNs in Hizbullah, Iran or North Korea. A Chinese energy firm or a Western consultant dealing with any of the Russian SDNs could be affected. “This is absolutely nuclear,” says a Russian official. “It goes beyond anything we had during the cold war.”

Another part of CAATSA requires the administration to submit a report to Congress identifying Russian oligarchs and senior foreign-policy officials with close ties to Mr Putin and his inner circle. Although the report will not place those named in it under sanctions, it makes them potential targets if the confrontation between Russia and the West escalates, thus perhaps making them pariahs in advance. The report, which will also estimate the wealth and sources of income of family members, including siblings, children, parents and partners, has already sown panic among the Russian elite.

“Who will be doing the checking? Is it the FBI, the CIA or someone else?” asks one of Mr Putin’s loyalists nervously. “Nobody likes what is happening. But there is not much we can do about it,” he admits. Inclusion in the report will be almost impossible to reverse. But the definition of an oligarch remains vague.

The report is due out by early February—just weeks before Russia’s presidential election—and could have large political consequences, fuelling anger at America among the elite and giving new ammunition to Alexei Navalny, Russia’s leading opposition figure and anti-corruption crusader. Still, implementation will be the key. The tension between Congress and the White House which triggered the legislation may also undermine its execution. But although the administration may not be breathlessly eager to implement personal sanctions, it cannot ignore them, either. “We will be watching them like hawks,” says a Senate staffer.