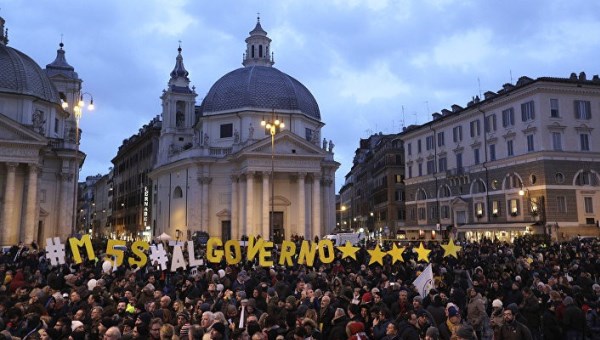 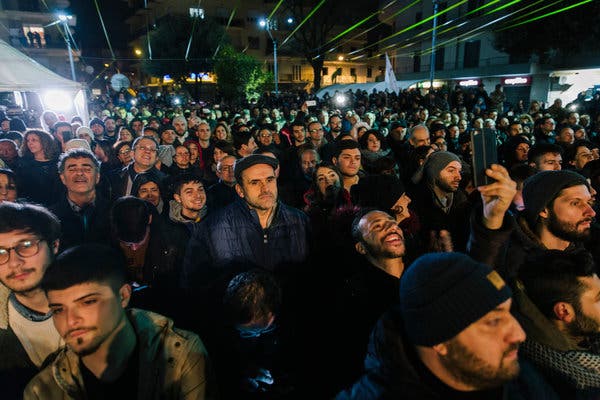 Supporters of the populist Five Star Movement celebrated its strong showing in Italy’s general elections in March.CreditGianni Cipriano for The New York Times

If you had to identify a place and time where the humanitarian dream — the vision of a society offering decent lives to all its members — came closest to realization, that place and time would surely be Western Europe in the six decades after World War II. It was one of history’s miracles: a continent ravaged by dictatorship, genocide and war transformed itself into a model of democracy and broadly shared prosperity.

Indeed, by the early years of this century Europeans were in many ways better off than Americans. Unlike us, they had guaranteed health care, which went along with higher life expectancy; they had much lower rates of poverty; they were actually more likely than we were to be gainfully employed during their prime working years.

But now Europe is in big trouble. So, of course, are we. In particular, while democracy is under siege on both sides of the Atlantic, the collapse of freedom, if it comes, will probably happen here first. But it’s worth taking a break from our own Trumpian nightmare to look at Europe’s woes, some but not all of which parallel ours.

Many of Europe’s problems come from the disastrous decision, a generation ago, to adopt a single currency. The creation of the euro led to a temporary wave of euphoria, with vast amounts of money flowing into nations like Spain and Greece; then the bubble burst. And while countries like Iceland that retained their own money were able to quickly regain competitiveness by devaluing their currencies, eurozone nations were forced into a protracted depression, with extremely high unemployment, as they struggled to get their costs down.

This depression was made worse by an elite consensus, in the teeth of the evidence, that the root of Europe’s troubles was not misaligned costs but fiscal profligacy, and that the solution was draconian austerity that made the depression even worse.

Some of the victims of the euro crisis, like Spain, have finally managed to claw their way back to competitiveness. Others, however, haven’t. Greece remains a disaster area — and Italy, one of the three big economies remaining in the European Union, has now suffered two lost decades: G.D.P. per capita is no higher now than it was in 2000.

So it isn’t really surprising that when Italy held elections in March, the big winners were anti-European Union parties — the populist Five Star Movement and the far-right League. In fact, the surprise is that it didn’t happen sooner.

Those parties are now set to form a government. While the policies of that government aren’t completely clear, they’ll surely involve a break with the rest of Europe on multiple fronts: a reversal of fiscal austerity that may well end with exit from the euro, along with a crackdown on immigrants and refugees.

Nobody knows how this will end, but developments elsewhere in Europe offer some scary precedents. Hungary has effectively become a one-party autocracy, ruled by an ethnonationalist ideology. Poland seems well down the same path.

So what went wrong with the “European project” — the long march toward peace, democracy and prosperity, underpinned by ever-closer economic and political integration? As I said, the giant mistake of the euro played a big role. But Poland, which never joined the euro, sailed through the economic crisis pretty much unscathed; yet democracy there is collapsing all the same.

[Receive arguments and opinions on the pressing social issues and hidden stories around the World Cup right in your inbox. Sign up for Offsides.]

I would suggest, however, that there’s a deeper story here. There have always been dark forces in Europe (as there are here). When the Berlin Wall fell, a political scientist I know joked, “Now that Eastern Europe is free from the alien ideology of Communism, it can return to its true path: fascism.” We both knew he had a point.

What kept these dark forces in check was the prestige of a European elite committed to democratic values. But that prestige was squandered through mismanagement — and the damage was compounded by unwillingness to face up to what was happening. Hungary’s government has turned its back on everything Europe stands for — but it’s still getting large-scale aid from Brussels.

And here, it seems to me, is where we see parallels with developments in America.

True, we didn’t suffer a euro-style disaster. (Yes, we have a continentwide currency, but we have the federalized fiscal and banking institutions that make such a currency workable.) But the bad judgment of our “centrist” elites has rivaled that of their European counterparts. Remember that in 2010-11, with America still suffering from mass unemployment, most of the Very Serious People in Washington were obsessed with … entitlement reform.

Meanwhile our centrists, along with much of the news media, spent years in denial about the radicalization of the G.O.P., engaging in almost pathological false equivalence. And now America finds itself governed by a party with as little respect for democratic norms or rule of law as Hungary’s Fidesz.

The point is that what’s wrong with Europe is, in a deep sense, the same thing that’s wrong with America. And in both cases, the path to redemption will be very, very hard.