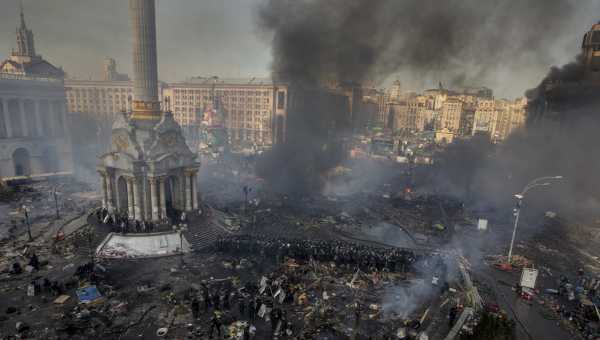 In Kiev, you can walk up the stairs from the metro onto a square that’s been home to three revolutions in thirty years, and any number of protests large and small. With its memorials, monuments, and a few men dressed up in panda suits, Kiev’s Maidan Nezalezhnosti (Independence Square) has become synonymous with modern Ukraine.

“For me, it’s Jerusalem,” says Sviatoslav Yurash, an activist who worked as part of an international public relations team for protesters during the 2013-14 revolution that toppled then-president Viktor Yanukovych, a client of Paul Manafort’s. “It’s the place that changed it all for me and for Ukraine.” Five years ago this month, a series of protests started on the Maidan, prompted by Yanukovych turning his back on an agreement between Ukraine and the European Union. Almost four months and more than a hundred deaths later, Yanukovych fled to Russia, an act soon followed by Vladimir Putin’s annexation of Crimea and proxy invasion of eastern Ukraine. Today, the war with Russian-led forces in eastern Ukraine drags on, a bloody backdrop to Ukraine’s preparations for presidential and parliamentary elections next year.

Walking here, it’s not hard to see why Yurash and other Ukrainians see the Maidan as hallowed ground. An exhibition with photos from the revolution surrounds the Independence Monument in the middle of the square. Men with megaphones promote tours of Yanukovych’s comically palatial mansion outside of Kiev, now property of the Ukrainian state.

For more, just walk up Institutska Street, which runs along the square towards Ukraine’s parliament. The cobblestoned road is lined with memorials to protesters. Flowers and red candles flank the faces and names of those shot dead by government snipers from the surrounding buildings on February 20, 2014—the revolution’s bloodiest day. The street has since been named after them, and closed off to traffic.

You’ll probably be approached by a vendor selling bracelets to raise money for soldiers still fighting a war against Russian-backed forces in the country’s east, costing more than 10,000 lives since 2014.

Get the latest from TNR. Sign up for the newsletter.

Alexei, 31, is one such vendor. A lawyer, he volunteers selling bracelets to raise money to treat wounded soldiers in a local hospital. There are few visible reminders on and around Maidan itself that there’s even a war going on, save for the occasional off-duty soldier in uniform. But Alexei’s not worried that Ukrainians are about to forget the conflict 400 miles east of here.

“People are just tired of the whole situation,” he says.

Taking a right after the memorials, you’ll find yourself in the shadow of the Hotel Ukraine, a hulking Soviet-era edifice that was originally named Hotel Moscow. The hotel’s lobby was turned into a makeshift emergency room—and morgue—for protesters on February 20, 2014.

You’ll also find yourself on the roof of a mall that was built under Maidan in the 2000s, replacing a hill that from the late 1970s until 1991 was home to a granite Vladimir Lenin statue that gazed over the square.

“These people have had a chance to become Ukrainian George Washingtons,” says Yurash. “And they’ve wasted it.”

And it’s up here where you’ll find a side of the new Ukraine that, depending on whom you ask, is talked about too little or too much:  Ukraine’s far-right. Stickers of the far-right National Corps, the political party of the Ukrainian National Guard regiment known as the Azov Battalion, are everywhere. Alongside a few soccer hooligan stickers and pieces of extremist graffiti, the National Corps stickers urge young people to “join the ranks,” promoting everything from “brotherhood” to “one blood,” all emblazoned with the party’s logo.

Azov formed in 2014 to fight Russian-backed forces in Ukraine’s east, and quickly earned a reputation as one of the fiercest anti-Russian forces in the country. But it has also openly accepted self-avowed neo-Nazis into its ranks—something that’s made it an easy target for Kremlin propaganda, who jump at opportunities to (incorrectly) claim that Ukraine is run by a fascist “junta.” Azov formed the National Corps in October 2016; earlier this year, they formed the National Militia, a street patrol that’s taken part in attacks on Roma camps. It helped organize a march in October with more than 10,000 people, including a handful of neo-Nazis from Germany.

Some days you can look over the Maidan from here and see a few National Corps members setting up a recruitment and promotion booth on the sidewalk, handing out the party’s monthly newspaper. The October edition’s cover featured party leader Andriy Biletsky, a man who once wrote about “[leading] the White Races of the world in a final crusade…against the Semite-led subhumans.”

At the other end of the square, up a side street, they’ve set up a multi-purpose youth center where teens can, among other things, work out and attend lectures on European far-right figures.

It’s often pointed out that far-right forces have minimal public support—the National Corps even polled a comical 0.1 percent in one recent poll. Currently, there’s little chance of them getting anywhere near Ukraine’s parliament in next year’s elections.

But the way these fringe forces have wormed their way in with law enforcement—in some cities, including Kiev, they’ve taken part in police patrols and operations—is dangerous, others counter. Volodymyr Ishchenko, a sociologist and lecturer at Kiev Polytechnic Institute, says that far-right forces like the Azov movement have taken advantage of Ukraine’s weak state: They operate with relative impunity and threaten the rights of minorities like Roma and LGBT in Ukraine. Worse, says Ishchenko, many domestic and international supporters try to downplay the issue because they worry it would feed into the Kremlin propaganda tropes about Ukraine being run by fascists and the far-right.

If it looks like most passers-by couldn’t care less about these teenagers and their free far-right newspapers, it’s because they’ve got plenty of other things to worry about. People like the grandmother taking a photo of her granddaughter as she scrambles up the statue of Cossack Mamay, a Ukrainian warrior-defender folk hero, are more concerned with corruption, pensions and rising prices. Recent polls show that these issues have come close, in citizens’ minds, to edging out the war in eastern Ukraine as the biggest challenge facing the country.

Corruption, activists like Yurash stress, is still a chronic problem in Ukraine. Despite international pressure to tackle the country’s rampant corruption head-on, Ukrainians in one recent poll say they encounter bribery more often now than in 2015. For Yurash, Ukraine’s politicians have sinned in failing to take the fight against corruption seriously—failing to build a new Ukraine in the way that he and others participating in the revolution had hoped.

“These people have had a chance to become Ukrainian George Washingtons,” says Yurash. “And they’ve wasted it.”

And, despite some progress, Ukraine’s economy remains weak. A recent study published by Credit Suisse says that Ukraine ranks among the worst countries in terms of its citizens’ median net worth. Many Ukrainians, especially young Ukrainians, are leaving the country to work abroad; according to a poll earlier this year, fewer than one in five Ukrainians under 35 years old felt they had a good future in Ukraine.

“I want Ukraine to have a good economy,” says Mariya, 20, working behind a coffee counter as, outside on the Maidan, a motley crew of other young Ukrainians in panda suits and cartoon character costumes bug tourists for selfies and some cash for their troubles.

Hope might sound like it’s in short supply, but even critics like Yurash say they’re optimistic, if angry. “My friends and colleagues from five years ago haven’t gone away,” he says, referring to fellow activists who were on the Maidan beside him. “They’re still fighting.”

Kateryna Kruk, 27, spent more than three months on the Maidan—93 days exactly, she says—making a name for herself livestreaming and live-tweeting the protests as they happened. Kruk is candid about how she and other Ukrainians have struggled in the wake of the 2014 revolution and the ongoing war in eastern Ukraine—she talks about how she sometimes has felt like she’s been “drowning in memories…in dark waters” because of what she’s witnessed and experienced, from seeing bodies in the streets to having friends die at the hands of Russian-backed forces in Ukraine’s east.

But even as the new Ukraine that she and others fought for seems like a dream sometimes—and as her friends continue to fight a war—activists like Kruk aren’t about to give up. Five years on, the revolution is far from a failure, she says—and it’s not over yet.

“I am not disappointed,” Kruk says, asked about the revolution’s success—or lack thereof—five years later. “I will never be disappointed.”

*An earlier version of this article incorrectly gave the date of the revolution’s deadliest day as February 18, rather than February 20.