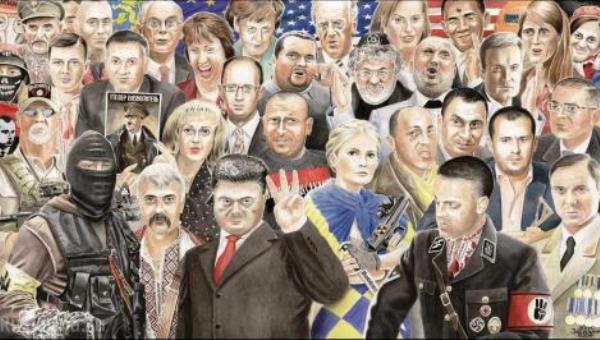 Are there any chances of rebirth after the Maydan “five-year plan”? What happened to the flourishing and developed republic as a result of “de-communization” and a series of Maydan? Is everything so bad? Or maybe it’s still worse than it seems? – questions that the publicist Andrei Manchuk is looking for, but does not always find answers

The other day on TV channel “1 + 1” told about the Ukrainian roots of actor Leonard Nimoy, who was born in Boston, in a family of Jewish refugees from the Volyn province and is best known for his role in the TV series Star Trek.

As is known, he played there a Vulcan Spock – a representative of a fictional cosmic race, which analyzes the surrounding reality on the basis of formal logic, almost not clouded by sediment of feelings and emotions.

There was a lot of irony in this – and not only because of the comical attempt to inscribe the American actor into the pantheon of Ukrainian celebrities after Andy Warhol or the billionaire Pritzker, who was elected governor of Illinois the other day.

If the Vulcan Spock tried to evaluate the results of the historical path of an independent Ukraine, he would surely have experienced something like cognitive dissonance.

The former Soviet republic, which possessed enormous economic, scientific, and human potential in 1991, as the famous Rukhov leaflets told us in detail, in less than thirty years, turned into the poorest country of the continent with a de-industrialized economy, a ruined infrastructure, a stagnant education and a completely degraded social sphere.

The human losses of Ukraine, where 52 million citizens lived at the turn of the nineties, are comparable to the population of far from the smallest European country and have long exceeded the number of direct and indirect victims of the famine.

Moreover, the rate of depopulation is constantly growing, as both Ukrainian and international experts in the field of demography speak out loud.

As a result, Ukraine has become something of a black hole of the continent – in most cases it is considered as a deeply peripheral country that supplies the world market of labor migrants, the Carpathian forest, smuggled cigarettes and illegally mined amber along with streams of weapons flowing from the combat zone.

But something else is important – all these destructive processes took place under the banner of the national revival of our unhappy homeland. The correlation was too obvious – the country was falling into the abyss as the growing popularity of nationalism, which seemed to be aimed at the well-being and prosperity of the Ukrainian nation.

Ukrainians lived worse and worse, but each stage of the permanent crisis, which was a consequence of the nationalist and neoliberal policies, only fueled nationalist sentiment, reinforcing the desire for the right “European” capitalism.

And unfamiliar with the logic of Hegel, Commander Spock could hardly comprehend this tragicomic paradox.

What happened over the years with our country? This question is being asked today by many, trying to isolate the moment when its formation supposedly took the wrong path.

However, these efforts are in vain, as Ukraine developed exactly as it was programmed during the nineties market restoration.

The economic system formed in those years was entirely built on the exploitation of the social wealth accumulated during the Soviet period — sometimes at a very heavy price.

In the eyes of the future oligarchs, the most valuable assets of state ownership were left in private hands, and the constantly impoverished state gradually discarded the unbearable burden of Soviet-era social guarantees.

Although a fairly strong opposition in the face of the parliamentary left-wing parties hindered this process to a certain extent – unlike, for example, Russia that survived the Yeltsin break-up.

Its basis was a peculiar synthesis of market fundamentalism, anti-communism and nationalism, densely seasoned with civilizational myths and anti-proletarian prejudices.

This very right-wing ideology marked the main line of state propaganda and at the same time became a real civic religion of the new Ukrainian intelligentsia in a wide range from frank Nazis to pro-European moderate liberals.

And it has fully proved its effectiveness in the sense of political domination over the society that was severely affected by the “reforms”.

“Post-Soviet nationalism is a mechanism of management and control in the hands of the ruling class,” we wrote almost ten years ago, in 2009. It was obvious that nationalism could transform social discontent into xenophobic prejudices, redirecting it to the “enemies of the nation”.

As the crisis deepened, at the stage of depletion of Soviet resources, nationalist ideology remained the last opportunity to keep the rapidly impoverished masses in obedience, in addition using their protest for their own political purposes.

It is necessary to clearly realize: European officials and the United States are ready to endlessly galvanize a fully bankrupt state, using it as a source of resources, a sales market and a convenient offensive base in the ongoing geopolitical war.

This circumstance allows to preserve the Ukrainian crisis for an unpredictable long time. Our patriotic rulers will make every effort to do this, as they fear responsibility for the results of their rule by Ukraine.

A streamlined state propaganda machine, which continues to exploit nationalist rhetoric, allows control to be maintained over a demoralized and intimidated society. Five years after Maidan, there was no dignity left in the country.

Ukrainians obediently demolish the increase in tariffs and lowering the quality of their lives, and government officials can afford the most mocking and scandalous phrases – such as the fact that corruption helps the fight against Putin, knowing that society will swallow any humiliation that will spill on top of it.

Worst of all, there are no socially influential forces left in Ukraine that could become the subject of political change, uniting the masses affected by the neoliberal politics around themselves.

The political opposition is demoralized and cleaned, the left parties are prohibited and cannot legally work under pressure from the nationalists cooperating with the government, trade unions have no influence, engaging in local and deliberately losing struggle in several enterprises of a huge country.

Deindustrialization has led to the final erosion of the working class, which is underclassified and is becoming a thing of the past, following closed or stagnant enterprises.

The able-bodied population seeks a way out in mass labor migration, and the liberal intelligentsia, which often acts as an agent of the struggle for democratic rights in other countries, hardly differs in its views from the ultra-right, obediently accepting the ideology of nationalism and militarism.

The country is rapidly passing invisible points of no return. New generations of Ukrainians are consistently inferior to their predecessors in the educational level, and the political views of young Ukrainians are formed in an atmosphere of hatred, with total dominance of historical mythology, which initially turns them into the electorate of right-wing parties and cannon fodder of future wars.

Vocational education and science are on the verge of destruction, so that in the case of the revival of closed factories in the nationalist “five-year plan” for them there will be almost no workers and engineering personnel.

However, this revival is almost impossible, because the former markets of the former giants of aerospace engineering have long been divided by competitors, and Ukraine, hopelessly lagging behind in scientific and technical terms, can no longer count on their return.

Even a relatively successful agrarian business suffers seriously from instability and the criminalization of society, which leads to real harvest battles every year.

Elementary filling of budget and pension funds is questionable, because in the conditions of a mass exodus of the working-age population, the country learns to live off loans plundered by the authorities, which will also have to be repaid in the coming years.

Ukraine was entirely formed during the Soviet era as a multicultural, advanced, industrially developed country, and the process of de-communization quite logically leads to its slow disintegration.

“A terrible end in the format of horror without end,” – this aphorism, which was heard once in one of our articles, rather accurately reflects the future of Ukraine – a slow process of withering and regress.

The inevitable catastrophe will not be simultaneous – a quick death, too, must sometimes be deserved. People tend to adapt to the gradually deteriorating conditions of life, getting used to what would previously seem unbearable to them. And they will continue to leave an endangered, stagnating country, which will still be included in the schemes of the global market – even if it passes through some specific types of ugly, semi-criminal business.

In this situation, there is nothing new – many countries in the Middle East or Central Africa have existed in such a mode for years, and in their capitals there is no shortage of expensive hotels, limousines, nightclubs and trendy hipsters.

And this process itself may stretch out over several generations, if the subjects of global politics one day do not turn Ukraine into the battlefield of a new world conflict.

“History has the ability to set up traps from time to time and get into blind corners,” wrote Sergei Zhadan shortly before the Maidan, bearing in mind the fate of the Ukrainian left, who were originally assigned to the role of internal enemy in Ukraine.

My comrades were offended by these words of the poet, although he was absolutely right.

Zhadan did not take into account only one thing – the absence of a left-wing alternative to the nationalist and neoliberal course merely indicated that Ukraine itself was in a history trap that slammed shut five years ago at the end of Euromaid with a loud sound of a gunfire or a falling gravestone.

“Is it all so bad?” A reader who is tired of dill ask, who usually wants to get at least a ghostly hint of hope.

Perhaps, everything is even worse, because the pace of the catastrophe that has engulfed the country intensifies faster than we predicted in 2014. However, this is no reason to abandon the struggle for the future of their homeland.

Now for this there is only one way – the unification of all social forces that are in favor of ending the war and the political democratization of Ukraine.

Creating such an alliance is very difficult – this is hampered by the growing pressure of the authorities and petty squabbles between opponents of the nationalist regime. However, there is no other way. Once trapped, we can get out of it only together, by combining our efforts.