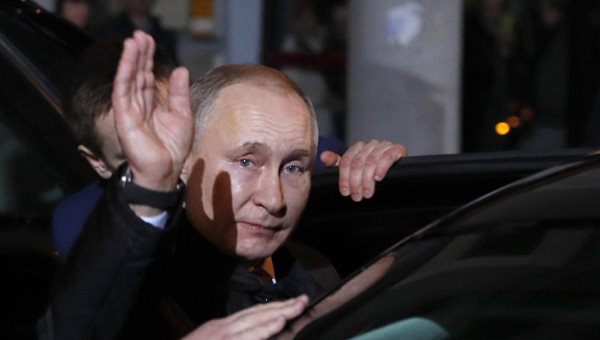 Russia faces a looming question: What follows Putin’s current, likely final presidential term? An answer is beginning to take shape – and may involve a new position for Putin and a reshaped political landscape.

New Russian order: After presidency, yet another role for Putin?

For many years, the main slogan of anti-Kremlin opposition activists – often shouted as they were being dragged into police vans at street protests – has been “Russia Without Putin!”

As Vladimir Putin’s fourth, and almost certainly final, six-year term as president heads into its second year, the prospect of a Russia without him is becoming real, if not yet urgent. The issue is no longer dominated by loud declarations in the streets, but by quiet conversations in the halls of power.

Inevitably, some are talking up schemes to keep Mr. Putin – and the relatively stable status quo he guarantees – in some position of having the final word on critical matters. Those are sure signs that a serious debate is beginning to erupt in Russia’s political elite. Its outcome may change Russia’s constitutional system, for better or worse, and determine what kind of country will emerge from the long period that people now call “the Putin era.”

“In any authoritarian system, the most dangerous moment is the transition of power,” says Olga Kryshtanovskaya, head of the sociological think tank Kryshtanovskaya Laboratories, and Russia’s top elite-watcher. “There is often a smuta – a Time of Troubles – that occurs in Russia when a long-time strong leader leaves power. It can bring chaos, and a war of elites. Putin is aware of this threat, and he may be thinking about ways to support a new president, maintain stability, while letting Putin himself leave smoothly.”

A system dependent on Putin

For two decades, Putin has been Russia’s indispensable leader. He inherited a country in serious disarray and restored it to order, rebuilt its economy, and made it an important player on the international stage again.

For most Russians, the Putin years have been relatively good – indeed, vastly better than the preceding, disastrous decade of the 1990s, which brought the country to the verge of disintegration. He accomplished this by recreating a version of Russia’s traditional top-down, centralized, bureaucratic state, with a single incontrovertible leader at the top.

Today’s Russians arguably enjoy higher living standards, greater personal freedoms, and even a healthier sense of national pride than at any time in history. Despite the geopolitical crisis of the past five years, which hit Russia with a double whammy of escalating sanctions and plunging oil prices, the country has demonstrated levels of political, social, and economic resilience that have confounded its Western critics.

One thing Russians have not gained in the Putin era is the power to control their country’s destiny through a genuinely democratic political process. But polls suggest that, at least so far, majorities accept the implicit trade-off that gives them stability, personal freedom, and relative prosperity, but little say in the way government policies are formulated and carried out.

International tensions and stagnating living standards amid the crisis of the past five years have made life tougher, and unpopular decisions like raising the pension age have cut into Putin’s once stratospheric popularity, but he still enjoys an approval rating of around two thirds.

To whom to pass the baton?

Most of Russia’s political, business, and bureaucratic elites have acquired their positions during the Putin era. They all have much to lose if Putin were to leave suddenly, given the intimate embrace between wealth and power that characterizes the Russian system. No one will forget the last such transition 20 years ago, from Boris Yeltsin to Putin, which was incredibly peaceful and orderly by Russian standards. Yet it led to massive shakeups in the elite. Many of the Yeltsin-era business oligarchs were driven out of the country, their assets nationalized, and the survivors forced to declare fealty to Putin.

In that case it was Putin, a KGB veteran with a relatively independent power base in the former Soviet security services, who was able to enforce the terms of orderly transition. Twenty years later, the Kremlin towers above all other political institutions, and Putin has neither groomed a successor from within his own circle, nor permitted the free political competition that might bring one forward from outside it. Putin’s problem, say some experts, is that he has no Putin of his own to pass the baton to.

“We no longer have any elite that exists separate from Putin,” says Gleb Pavlovsky, a former Kremlin adviser turned critic. “People connected to this regime depend upon it entirely, and they will cease to exist if they lose that connection. There are no guarantees for them if Putin leaves, so they are scared of that inevitability.”

There is no systematic polling data on how most Russians might react. The Levada Center, Russia’s only fully independent public opinion agency, has included the question in focus groups that it conducts.

“What we find is that majorities take it calmly, most wouldn’t mind if Putin stayed or if he left,” says Denis Volkov, a Levada researcher. “There are smaller groups, basically the poorest people and liberals, who want him to leave. But we do notice the trend that people in general are growing increasingly tired of Putin. It’s hard to say how that might play out in the next five years.”

Just how Putin’s reign might be extended seems to have entered public debate. Before the new year, Parliamentary Speaker Vyacheslav Volodin publicly voiced the idea of amending Russia’s 1993 constitution to create a new post that would keep Putin at the pinnacle of power after he leaves the presidency in 2024. Earlier, the veteran head of Russia’s Constitutional Court, Valery Zorkin, had penned a long piece in the government newspaper, Rossiskaya Gazeta, that seemed to argue against changing the country’s fundamental law for such purposes.

Experts say there are three basic ideas under discussion for navigating the transition away from Putin, while maintaining Putin himself in some supreme capacity.

One is the idea of creating a new state from a union of Russia and Belarus, which would require new political structures to rule it. It’s an old idea, and actually already exists in theory. But its realization has been thwarted by a host of practical obstacles. Such a state might give a new lease on life to both Putin and longstanding Belarusian strongman Alexander Lukashenko, and might be broadly popular in both countries.

“People are certainly talking about a new union state, which could solve a lot of problems,” says Sergei Markov, a former Putin adviser. “But it has proven to be very complicated to implement in practice, and it’s not clear how it could happen now.”

A second plan would expand the powers of the State Council, a Kremlin advisory body that already deliberates on matters of high policy but has no formal authority. It would be possible to amend the Constitution to vest key powers in the council, making it something like the Soviet-era Politburo, with Putin staying on as chairman after his presidential term ends.

“It’s not clear how much constitutional change would be required. It may be just a few amendments,” says Nikolai Petrov, a professor of political science at Moscow’s Higher School of Economics. “The main thing is that Putin would have to maintain control over the military and security forces. We had a rehearsal for this during the four years [2008-12] when he stepped aside and Dmitry Medvedev became president, where Putin kept control while holding the post of prime minister. Now it would have to be more formal, an enduring system.”

The third idea is the path not taken after the Soviet collapse; turning Russia into a parliamentary republic, and perhaps keeping Putin as symbolic head of state. Many have argued through the years that such a vast and diverse country as Russia would be better served by a representative legislature than by one strong leader. That issue was resolved with gunfire in 1993, when Mr. Yeltsin destroyed the elected parliament and subsequently rewrote Russia’s Constitution to vest the lion’s share of power in the Kremlin. It is a solution that some political forces in Russia still favor, including the Communist Party, but one that experts doubt could emerge from the present political setup.

“There is no reason to believe that democratic institutions will just appear all of a sudden,” says Mr. Petrov. “In our present situation, most institutions are weakening while presidential power is growing. It is Putin who will decide the shape of political power, and there is no one today with the stature to contradict him.”

A matter of timing?

Some analysts, such as Petrov, believe that key decisions will have to be taken soon, so that the new power arrangements are up and running smoothly before the end of Putin’s current presidential term in 2024. Others, including former Putin adviser Mr. Markov, say that the choices will be put off as long as possible, in hopes that Russia’s deepening standoff with the West might resolve itself and thereby make it easier to risk a transition to a new elected president within the existing system.

“Russia views itself as being in a state of war, and Putin is the tried and true leader that we need to keep as long as that situation prevails,” says Markov.

Ms. Kryshtanovskya says the Kremlin furniture may be rearranged, but Putin will almost certainly stay in some key capacity for as long as that is possible.

“If Putin heads a state council, then that’s where the locus of power will be,” she says. “It’s not about the distribution of powers between the presidency, or the parliament, or any other body. It’s just about the place where Putin will go.”