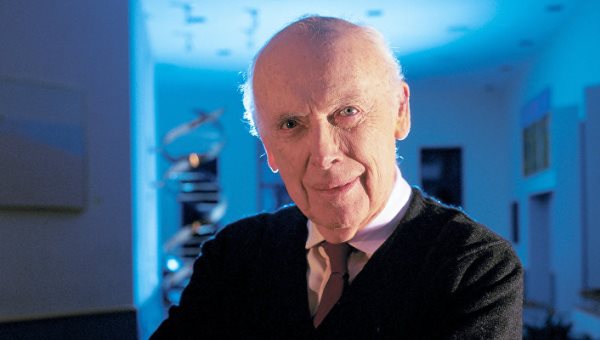 James Watson Had a Chance to Salvage His Reputation on Race. He Made Things Worse.

It has been more than a decade since James D. Watson, a founder of modern genetics, landed in a kind of professional exile by suggesting that black people are intrinsically less intelligent than whites.

In 2007, Dr. Watson, who shared a 1962 Nobel Prize for describing the double-helix structure of DNA, told a British journalist that he was “inherently gloomy about the prospect of Africa” because “all our social policies are based on the fact that their intelligence is the same as ours, whereas all the testing says, not really.”

Moreover, he added, although he wished everyone were equal, “people who have to deal with black employees find this not true.”

Dr. Watson’s comments reverberated around the world, and he was forced to retire from his job as chancellor of the Cold Spring Harbor Laboratory on Long Island, although he retains an office there.

He apologized publicly and “unreservedly,” and in later interviews he sometimes suggested that he had been playing the provocateur — his trademark role — or had not understood that his comments would be made public.

Ever since, Dr. Watson, 90, has been largely absent from the public eye. His speaking invitations evaporated. In 2014, he became the first living Nobelist to sell his medal, citing a depleted income from having been designated a “nonperson.”

But his remarks have lingered. They have been invoked to support white supremacist views, and scientists routinely excoriate Dr. Watson when his name surfaces on social media.

Eric Lander, the director of the Broad Institute of M.I.T. and Harvard, elicited an outcry last spring with a toast he made to Dr. Watson’s involvement in the early days of the Human Genome Project. Dr. Lander quickly apologized.

“I reject his views as despicable,” Dr. Lander wrote to Broad scientists. “They have no place in science, which must welcome everyone. I was wrong to toast, and I’m sorry.’’

And yet, offered the chance recently to recast a tarnished legacy, Dr. Watson has chosen to reaffirm it, this time on camera. In a new documentary, “American Masters: Decoding Watson,” to be broadcast on PBS on Wednesday night, he is asked whether his views about the relationship between race and intelligence have changed.

“No,’’ Dr. Watson said. “Not at all. I would like for them to have changed, that there be new knowledge that says that your nurture is much more important than nature. But I haven’t seen any knowledge. And there’s a difference on the average between blacks and whites on I.Q. tests. I would say the difference is, it’s genetic.’’

Dr. Watson adds that he takes no pleasure in “the difference between blacks and whites” and wishes it didn’t exist. “It’s awful, just like it’s awful for schizophrenics,” he says. (His son Rufus was diagnosed in his teens with schizophrenia.) Dr. Watson continues: “If the difference exists, we have to ask ourselves, how can we try and make it better?”

Dr. Watson’s remarks may well ignite another firestorm of criticism. At the very least, they will pose a challenge for historians when they take the measure of the man: How should such fundamentally unsound views be weighed against his extraordinary scientific contributions?

In response to questions from The Times, Dr. Francis Collins, the director of the National Institutes of Health, said that most experts on intelligence “consider any black-white differences in I.Q. testing to arise primarily from environmental, not genetic, differences.”

Dr. Collins said he was unaware of any credible research on which Dr. Watson’s “profoundly unfortunate” statement would be based.

“It is disappointing that someone who made such groundbreaking contributions to science,” Dr. Collins added, “is perpetuating such scientifically unsupported and hurtful beliefs.” 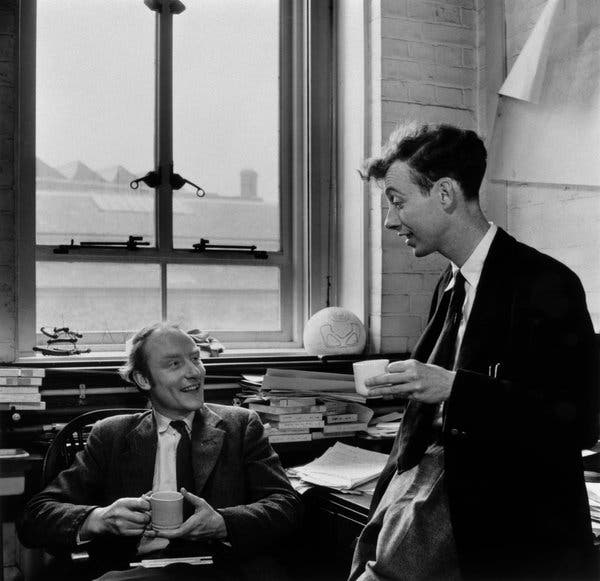 Dr. Watson is unable to respond, according to family members. He made his latest remarks last June, during the last of six interviews with Mark Mannucci, the film’s producer and director.

But in October Dr. Watson was hospitalized following a car accident, and he has not been able to leave medical care.

Some scientists said that Dr. Watson’s recent remarks are noteworthy less because they are his than because they signify misconceptions that may be on the rise, even among scientists, as ingrained racial biases collide with powerful advances in genetics that are enabling researchers to better explore the genetic underpinnings of behavior and cognition.

“It’s not an old story of an old guy with old views,” said Andrea Morris, the director of career development at Rockefeller University, who served as a scientific consultant for the film. Dr. Morris said that, as an African-American scientist, “I would like to think that he has the minority view on who can do science and what a scientist should look like. But to me, it feels very current.”

David Reich, a geneticist at Harvard, has argued that new techniques for studying DNA show that some human populations were geographically separated for long enough that they plausibly could have evolved average genetic differences in cognition and behavior.

But in his recent book, “Who We Are and How We Got Here,” he explicitly repudiates Dr. Watson’s presumption that such differences would “correspond to longstanding popular stereotypes” as “essentially guaranteed to be wrong.”

Even Robert Plomin, a prominent behavioral geneticist who argues that nature decisively trumps nurture when it comes to individuals, rejects speculation about average racial differences.

[For more coverage of race, sign up here to have our Race/Related newsletter delivered weekly to your inbox.]

“There are powerful methods for studying the genetic and environmental origins of individual differences, but not for studying the causes of average differences between groups,” Dr. Plomin writes in an afterword to be published this spring in the paperback edition of his book “Blueprint: How DNA Makes Us Who We Are.”

Whether Dr. Watson was aware of any of this science is unclear. In the film, he appears to have grown increasingly isolated. He mentions missing Francis Crick, his collaborator in the race to decipher the structure of DNA.

As history now knows, the duo was able to solve the puzzle in 1953, with their hallmark models of cardboard and metal, only with the help of another scientist, Rosalind Franklin, whose X-ray photograph of the DNA molecule was shown to Dr. Watson without her permission.

The tools of molecular biology unlocked by their discovery have since been used to trace humanity’s prehistory, devise lifesaving therapies, and develop Crispr, a gene-editing technology that was used recently, and unethically, to alter the DNA of twin human embryos.

And Dr. Watson became perhaps the most influential biologist of the second half of the 20th century. His textbook, “Molecular Biology of the Gene,” helped define the new field. First in a laboratory at Harvard and then at Cold Spring Harbor, he trained a new generation of molecular biologists and used his star power to champion such projects as the first sequencing of the human genome.

“You knew when you heard him that you were at the start of a revolution in understanding,” Nancy Hopkins, a biologist at the Massachusetts Institute of Technology who studied with Dr. Watson in the 1960s, says in “Decoding Watson.’’

“You felt as if you were part of this tiny group of people who had seen the light.”

Mr. Mannucci, the director and producer, was drawn to his subject by a certain similarity to “the King Lear story,” he said — “that this man was at the height of his powers and, through his own character flaws, was brought down.” The film highlights Dr. Watson’s penchant for provocation, exemplified by his candid 1968 memoir, “The Double Helix,” of the race to decipher DNA’s structure.

In later years, even before his 2007 comments, Dr. Watson began making offensive statements about groups of people, suggesting, among other things, that exposure to sunlight in equatorial regions increases sexual urges and that fat people are less ambitious than others.

“He was a semiprofessional loose cannon,” said Nathaniel Comfort, a science historian at Johns Hopkins University. “We become prisoners of our own personas.” In the film, Dr. Comfort also suggests that Dr. Watson’s views on race are the result of the genetic filter he applies to the world: “There’s a risk to thinking about genes all the time.”

But Mary-Claire King, a leading geneticist at the University of Washington who knows Dr. Watson well and is not in the film, suggested that the racially homogeneous culture of science also played a role in shaping Dr. Watson’s misconceptions.

“If he knew African-Americans as colleagues at all levels, his present view would be impossible to sustain,” Dr. King said.

If that is the case, it may not bode well for combating prejudice in biomedical research, where African-Americans represent just 1.5 percent of grant applications to the N.I.H. Biases in hiring by medical school science departments are well documented.

“It’s easy to say, ‘I’m not Watson,’” said Kenneth Gibbs, a researcher at the N.I.H. who studies racial disparities in science. “But one should really be asking himself or herself, ‘What am I doing to ensure our campus environments are supporting scientists from backgrounds that are not there?’”

“Decoding Watson” marks the first time Dr. Watson and his wife, Liz, have spoken publicly at length about finding out that Rufus, their older son, has schizophrenia. Rufus and his brother, Duncan, also appear in the film, but Mr. Mannucci said that other people close to Dr. Watson declined to participate.

In interviews with The Times, some said they believed that Dr. Watson was ill served by speaking publicly at this point in his life.

Still, Mr. Mannucci said that he had asked Dr. Watson about race and intelligence several times over the course of making the film in order to ascertain his real views. “I didn’t want to feel that it was a product of age or having caught him in a moment, trying to get a rise out of someone,” he said.

In the film, Dr. Watson sometimes seems to be grasping for explanations for his own views on race and intelligence. He mentions that he is a “product of the Roosevelt era,” and that he has always believed genes are important.

“To the extent that I’ve hurt people,” he said, “of course I regret it.”

Amy Harmon is a national correspondent, covering the intersection of science and society. She has won two Pulitzer Prizes, for her series “The DNA Age”, and as part of a team for the series “How Race Is Lived in America.”