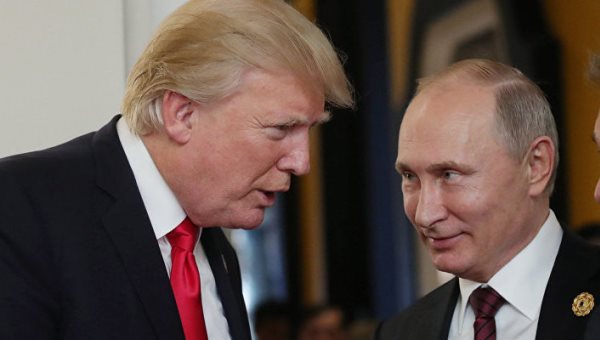 Speaking about the situation with the recognition by Western countries of the self-proclaimed “president” of Venezuela Guaydo, the author of the article for some reason does not ask what, for example, Britain and Canada will do in the case of many thousands of rallies in the United States demanding Trump’s resignation. Will they really join the demands of the workers? Or does this precedent not apply to the United States? And to Russia?

Why China, Russia and Turkey are standing with Maduro—in the US’s backyard

Thousands took to the streets in Venezuela last week to demand the resignation of president Nicolas Maduro.

Amid the protests, opposition leader Juan Guaidó declared himself the country’s rightful leader, prompting a cascade of diplomatic statements around the world.
“Now it’s time for every other nation to pick a side,” US secretary of state Mike Pompeo told the United Nations Security Council on Saturday, urging them to reject “Maduro and his mayhem.”
The US, UK, Canada and majority of Latin American nations have already declared support for the upstart Guaidó, while Russia, China, Turkey and others have rallied behind six-year president Maduro.
Venezuela is an ideological battleground, says Ben Rowswell, who was Canadian ambassador to Venezuela from 2014-17.
“If Maduro is able to stay in power, it will benefit those that believe that the state should have the final say, no matter what citizens want—like Cuba, Russia and China,” he told CNN.
“If Maduro is forced out, it will help those countries that believe that final political authority should rest with citizens, like most of Latin America, Canada and the US,” he said.
Increasingly isolated in South America and the West, Maduro has sought to deepen ties with Russia and Turkey for years.
He shares a strongman style of rule with Turkish President Recep Tayyip Erdogan and Russian president Vladimir Putin, says Evren Celik Wiltse, a political scientist at South Dakota State University who studied in Turkey and lectures on Latin American politics.
“They are all about keeping their populations under check, grabbing more power and projecting it to the rest of the world,” Wiltse told CNN in an email.
Maduro also sees his relationships with China and Russia as a form of “life insurance” at the United Nations, adds Víctor M. Mijares, political scientist at the Universidad de los Andes, Colombia.
“China and Russia have veto powers and would be able to save the Venezuelan regime from a punitive resolution against it,” said Mijares via email.
But what do his backers get in return? We asked regional experts to weigh in. 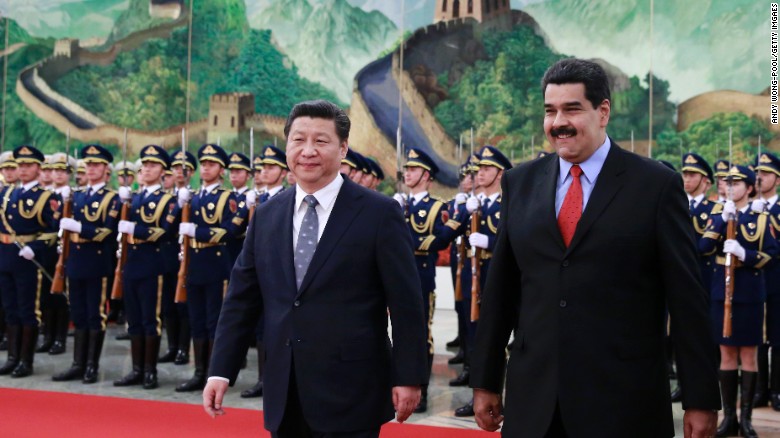 China has invested heavily in Venezuela

China is Venezuela’s most important creditor, says Mijares. From 2007 to 2016, China’s state banks extended 17 loans to Venezuela worth a total of $62.2 billion, according to the Inter-American Dialogue, a US-based think tank — more than it loaned to any other Latin American country.
And from 2005-15, Chinese companies invested a total of $19.15 billion in projects in Venezuela, according to figures compiled by the American Enterprise Institute, a public policy research institute based in Washington DC.
However, figures show that China then cut back on investments, perhaps with an eye on what it was owed and mounting evidence of Venezuela’s inability to meet repayments. From 2016-18, it added just $1.84 billion to its investments in Venezuela.
“The relationship has become increasingly political, with China interested in propping Maduro up for economic reasons,” Mijares told CNN via email, “as well as geopolitical, in the midst of tensions with the United States.”
And China’s repayment hopes could be thrown into further uncertainty if Maduro leaves office. Experts say that Maduro has focused on meeting debt repayments rather than alleviating the growing humanitarian crisis.
A new government could prioritize dealing with shortages of food and medicine instead of paying creditors. 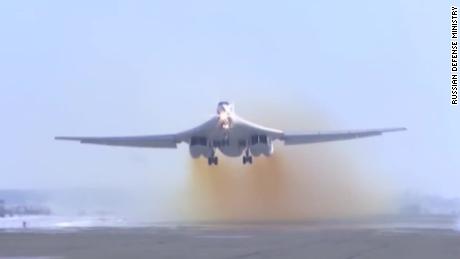 Russia and Venezuela’s friendship dates back to the presidency of Hugo Chavez.
Venezuela was one of few countries in the world to follow Russia’s lead in recognizing the Georgian breakaway provinces of Abkhazia and South Ossetia as independent, said Mijares. Venezuela has also backed the Russian positions on Syria and Ukraine.
“Now Russia has become Venezuela’s most important business partner in the Orinoco Belt,” he said, referring to the oil fields in northern Venezuela.
And Russia’s state-run oil company Rosneft has a vested interest in Maduro’s government.
In December 2016, Rosneft took a nearly 50% stake in Citgo, a U.S.-based oil company that’s owned by Venezuela’s energy giant, PDVSA, as collateral for a $1.5 billion loan to Maduro’s government.
In 2017, signs pointed to Russia and Venezuela deepening ties as the Kremlin extended a lifeline to the cash-stripped country by agreeing to restructure $3.15 billion of debt payments that it owes Moscow.
However Venezuela’s total debt to Russia could be much higher.
Some foreign policy experts see Putin’s investment as an attempt to build influence in Latin America, a region where the US once held significant sway.
In a show of what close military ties could mean for security in the region, Russian bombers capable of delivering nuclear weapons flew to Venezuela to take part in joint exercises in December 2018.
Putin “is clearly trying to send a message to the United States, that he can play in our backyard,” former US assistant secretary of defense Derek Chollet told CNN at the time. 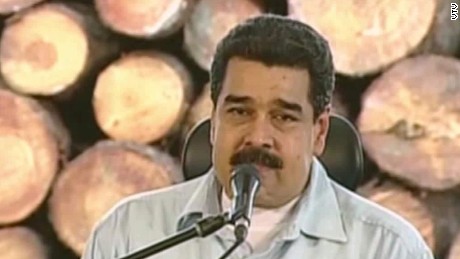 After Turkey experienced a failed coup attempt in 2016, relations with Venezuela have become increasingly close.
The Maduro government claims to have suffered repeated coup attempts in recent years, and in the past week both governments have described the current crisis in Caracas as another one.
“Turkish leaders, and specifically Erdogan, clearly see Maduro as someone unfairly targeted by the West,” said Asli Aydintasbas, researcher at the European Council on Foreign Relations.
“There is a sense of affinity—a tendency to identify with him since the failed coup attempt of 2016.”
Venezuela sends gold to Turkey. Turkey exports food and humanitarian aid to Venezuela. But for both, the political links may outweigh the economics.
“With the loss of Venezuelan allies in Argentina and Brazil, relations with Turkey serve as a counterweight,” said Helen Yaffe, a researcher at the London School of Economics’ Latin America and Caribbean Centre.
“Relations with Turkey mean having an ally that is connected to Europe and is a NATO member.”
The relationship plays into Turkey’s ambition to become a bigger geopolitical player, too.
As Mehmet Ozkan, a researcher at the Center for Global Policy in Washington, DC, points out: “Turkey considers itself as a global economy, tries to project its power, and one way to do it is through building alliances and especially providing humanitarian aid.”
He cautions that those aid deliveries, distributed by the military, can permit Maduro to drive the country further into an economic vortex. 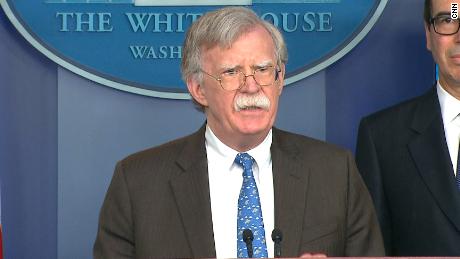 Although President Donald Trump backs Guaidó and has imposed sanctions on Maduro and his inner circle, the US is still Venezuela’s largest customer for oil.
A break in that trade would hit both countries hard, which makes Monday’s decision to sanction Venezuela’s state-owned oil company Petroleos de Venezuela, S.A. confusing at first glance.
However, money from any purchases of Venezuelan oil by US entities would be released only to the legitimate leaders of Venezuela, according to US Treasury Secretary Steve Mnuchin and national security adviser John Bolton, which presumably includes Venezuela’s self-declared interim President Juan Guaidó.
Has the US felt threatened by Venezuela’s pursuit of other relationships, and success in finding a major partner in China and support from Russia?
The country’s relationship with powers outside the US orbit is already cause for concern in Washington, DC, says Helen Yaffe.
“Throughout the 2000s, Russia and China made serious inroads into Latin America, increasing trade and investment,” she said, adding that the US took measures to counteract that tendency under President Obama.
The US has traditionally considered the region to be its backyard, and the increasing influence of rival global powers close to its territory has worried officials.
But Venezuela’s few friendships may also offer strategic opportunities.
As Ozkan points out, Turkey could now be in a position to assist US dialogue with Caracas given Erdogan’s good personal relationships with both Trump and Maduro.
“Trump can push Turkey to be a facilitator or a leverage over Maduro for an exit,” Ozkan told CNN via email.