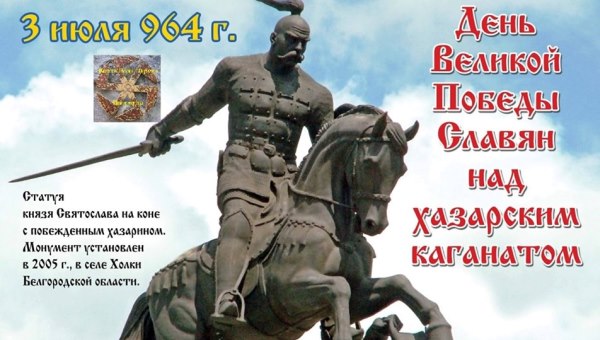 The victory over the Khazaria is the triumph of the Slavic weapons and invincible spirit over the Jewish parasitic system created in the Khazar state. 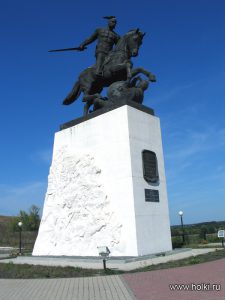 “The rout of the Khazars”

Russia turned out to be the most powerful and consistent enemy of the Jewish Khazar Khaganate. The deadly blow to the Khazar Khaganate, which put an end to its independent existence, was struck by the Emperor of Kiev, Svyatoslav, Igor’s son.

In 964 AD, being 22 years old, preparing a campaign against the Khazars, Svyatoslav did not go straight ahead across the steppe through the Volga-Don interfluve, undertaking a skillful maneuver. With a total of 20,000 troops he walked around with it, reached Ryazan, descended along the Oka to the Volga, and then moved on 500 boats with a small number of troops and immediately laid siege to the capital Itil. The Khazars did not expect a strike from the north, and could not organize a serious defense. Svyatoslav took it by storm, and, as the chronicles write, did not leave a stone unturned in it. Then the Bright Warrior undertook a campaign in the North Caucasus region, where he broke the Khazar stronghold – the Semender fortress. After that, the squad of Svyatoslav moved to the Don, where by storm she took and destroyed the eastern fortress of the Khazars – Sarkel.

According to legends, Svyatoslav ordered his soldiers to renounce “gold”, because they did not go for war for the sake of profit, but against “darkness” – a parasitic Khazar social system, which for many centuries robbed the land of our ancestors.

Thus, Svyatoslav, having made an unprecedented campaign thousands of kilometers in length, captured the main strongholds of the Khazars on the Don, on the Volga, and in the North Caucasus. At the same time, he created the basis for the influence of the Slavs in the North Caucasus – the Tmutarakan principality. These campaigns crushed the power of the Khazar Kaganate, which ceased to exist at the turn of the X-XI centuries.

As a result of the campaigns of the Grand Emperor Svyatoslav, the Old Rus state achieved the security of its southeastern borders and became the main force in the Volga-Caspian region at that time. The Khazar Khaganate collapsed and enabled Rus to develop as a state. At the same time, Slavic and many other tribes living around were saved. As a result, their development has been determined for many centuries to come. Having put an end to the Khazar bondage, Rus cleared a military barrier from its path, closing the trade routes to the East, which made it possible to revive trade between Europe and Asia …

Unfortunately, for the majority of Rus people, all knowledge about the Khazars is exhausted by well-known Pushkin lines, according to which the “prophetic Oleg” is going to “take revenge on the unreasonable Khazars.” In the history books, only a few mean words are devoted to the defeat of the kaganate by Emperor Svyatoslav. The victory of Rus over the powerful southern neighbor and in the officially approved list of days of military glory is not mentioned. Of course, several sayings of Svyatoslav became a textbook (“I go to “You”!”, Etc.), but few of whom they associate with the defeat of the Khazars.

Meanwhile, such eminent domestic historians as B.A. Rybakov, L.N. Gumilev and M.I. Artamonov has repeatedly pointed out that this truly grand victory is among the most significant events in Rus and world history. And it is not surprising, because the Khazars were not only the first serious enemy of our then very young state, but also represented by the ruling Judaic elite in fact subjugated medieval Europe (primarily financially) to their influence. The results of Svyatoslav’s campaign against the parasitic kaganate were completely exceptional: the routes to the East were cleared, the Crimea became Russian, a number of Khazarian satellites stopped being a hostile barrier for Russia, freed themselves from Jewish oppression and a number of European states.

Read about this and many other things in the book by Stanislav Dubikovsky “The Edge of Epoch: The Fatal Choice of Humanity”:

Book by Stanislav Dubikovsky: The Fatal Choice of Humanity. In 3 languages!