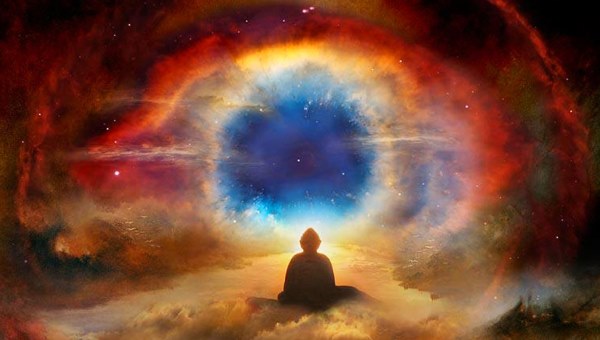 Do not litter, children, the Native rumor with the verb and adverbs of a foreign language.
Only the words of the Native live in the hearts, and other voices are dead to the Soul.
(About the true Old Russian language – the proto-language of all languages of the World)

In the fundamental work “Palimpsest of the Gods: The Secret Revealed” (2020) Stanislav Dubikovsky points out that the Bukvitsa (Cyrillic, old Russian alphabet) consisting of 49 letters is an ideal 7×7 matrix, which contributes to the expansion of consciousness and the maximum disclosure of human abilities and capabilities.

Gregory Skovoroda once wrote that the seventh week is closed by Pentecost. He spoke about the Bukvitsa (Cyrillic), which is the perfect 7×7 matrix. This matrix is readable in all directions (including depth) and works like a human brain – in volume. Compare with what is being taught now in schools – only linearity and flatness. So we get a linear, planar, very limited use of the capabilities of the human brain. 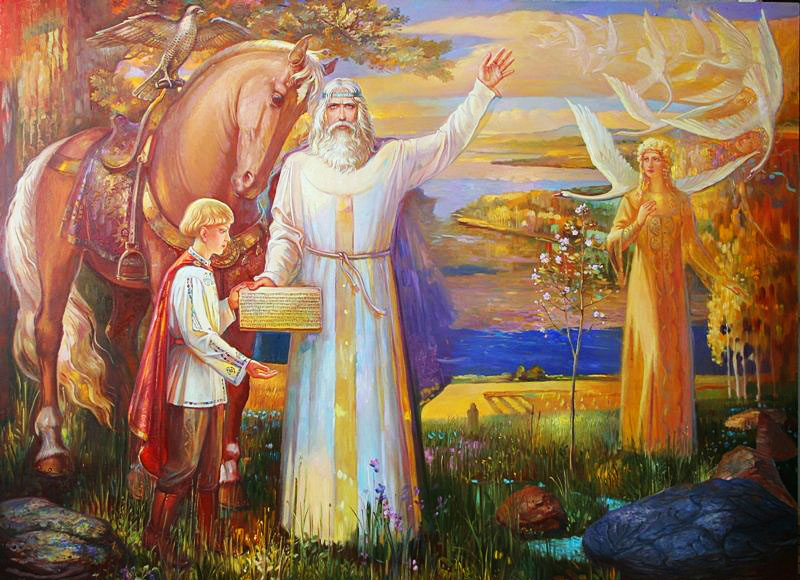 It is no longer a secret for anyone that over the past centuries, not evolution (development), but involution (degradation) has taken place on Earth. It is obvious that the knowledge, abilities and skills of the White Gods, which helped to develop all peoples on the planet, far exceeded the level of knowledge to which modern civilization fell back. This also applies to astronomy, and the still incomprehensible mechanism for the construction of megalithic cities, pyramids, etc.

This only suggests that the Ury (the manifested Gods on Earth) – the Magi-priests of the Rus (Slavic-Arians) originally possessed the fullness of divine knowledge. There were no transitional forms of development of the source language, since it was originally perfect and bestowed by the Heavenly Gods. Bukvitsa could not appear as a result of evolution. It was originally an ideal volumetric structure in which all divine wisdom is encrypted.

We bring to your attention the author’s version of reading the Bukvitsa. 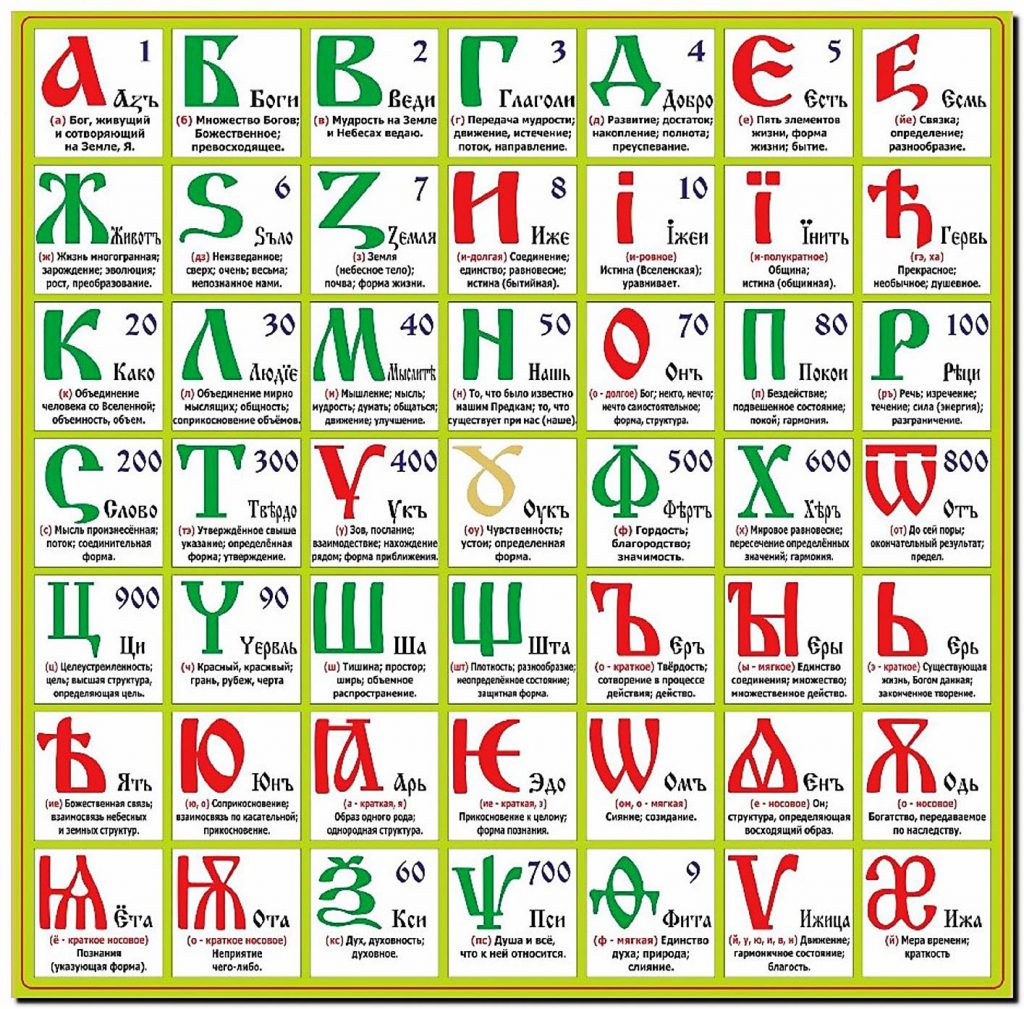 Read lines from left to right and from right to left

1. The Heavenly Gods know their earthly brothers and help them to do good on Earth in different ways.
(Conversely: the diversity of life forms on Earth is good through which the wisdom of the Heavenly Gods is transmitted to the Earthly Gods).
2. Cognition of the unknown designs of the Universe on Earth takes place in the union of the Divine stream with people in a state of reverence, ecstasy.
(Conversely: the connection of people with the Universal flow harmonizes their life with the Earth, as a part of the Universal form).
3. Each person connected to the Universal flow unites with people like him. Shares with them the knowledge gained from previous generations. Such an exchange brings people closer to the Divine structure. In calm communication, the creative process takes place.
(Conversely: at the moment of creation by the reification of the Divine plan in our world and the creation of thought forms, a person is in conjunction with the Universal mind).
4. As a result of such a creative thinking process, a thought form is born, an integral indicator that gets its name (word). This word is accepted and approved by all. It is put in the basket with the rest of the basic concepts that people have already learned. The word acquires significance in the world balance, hardens and becomes indestructible.
(Conversely: the created thought-form must maintain harmony in the World, be truthful and sincere. Only such a result of creativity brings us closer to the Divine idea).
5. From such basic concepts, bricks, a whole structure is composed. The new elements fit into the whole. The building is growing. The volume of the cognized field (quantity) is expanding. The content of the volume (quality) is studied in more detail. Through independent creative actions of a person and his actions in a group of like-minded people (including those from other worlds), cognition and creation (reification) of God’s plan on Earth takes place.
(Conversely: existing life, as a multitude of creations in the process of actions, is not complete. It is only a facet of a higher structure).
6. Divine connection, the craft of the clan, methods of cognizing the external world, orientation towards creation, images of an ascending improving future (what is “good” and what is “bad”) – all this is the wealth of the Clan and is inherited.
(Conversely: all the wealth accumulated by humanity on Earth, including correctness, correctness, agreement, are images with which we can touch the understanding of the integrity of all that exists and observe the Divine interconnection of Heavenly and Earthly structures).
7. Cognition of the new through a critical perception of reality, spiritual development with love for everything on Earth, awareness of oneself as a part of this being – this is the goal of human life.
(Conversely: Time, flowing in Space, is the strength of a person walking along the path of life, preserving the purity of the soul and the strength of the spirit. It (time) itself is able to cut off unnecessary things in the process of cognition. Time heals. Time will tell).


Read columns from top to bottom and bottom to top, left to right

1. The Earthly God lives like an ordinary person who is connected to the Universal flow. Creates thought-forms and adds a whole out of them. By maintaining the relationship between earthly and heavenly structures, he learns new things.
(Bottom: cognizing the Divine connection of the Higher structure with the created thought form, a person connects to the Universal flow and becomes (transformed) God on Earth).
2. The Heavenly Gods, the creators of the unknown, instruct people to cognize, materialize and improve their plans with the help of the ability to cut off the unnecessary, unnecessary.
(Bottom: rejecting unnecessary and harmful (thinking critically), creating beauty, moving along the path of development and improvement of their craft, following the instructions from above, people connect with the unknown, beyond understanding, the World of Heavenly Gods).
3. The wisdom of the Universe is that everything that happens in the sky is reflected on the Earth. Reflecting on this intrigues us, motivates us to action, expands the boundaries of our perception and strengthens our spirit.
(Bottom: The spirit of the human race, spreading throughout the entire volume of our space, calls to reflect on Earthly wisdom).
4. The transmission of truths of being occurs through our traditions and foundations, which are the protection of the integrity of our soul.
(Bottom: The soul is given to a person for cognition of the depth of thoughts. Basic feelings create a state inside a person that gives him the opportunity to perceive information transmitted by the Universe).
5. Through the open Universal channel, the Heavenly Father gives each person, regardless of the actions or inaction of this person, everything necessary for creative work (knowledge, strength, support) in a constantly changing World.
(Bottom: Power directed to creative activity is of great importance to God and is true Good).
6. The standard of living of people on Earth, their tranquility and Universal harmony depend on the unity of the images of Kindness and Mercy (on the same perception of the concepts of Good and Evil).
(Bottom: the unity of the images created by many creators establishes harmony in the World. Divine order and peace among people is established, without disturbances and worries. This is the form of life in which a person should live).
7. A bundle of spiritual beauty and physical strength is the final result of the life created by the Creator. This is our wealth, which must be preserved and passed on to future generations (A healthy mind in a healthy body is a great success).
(Bottom: Life is wealth given by God. It is the result of His creativity, a beautiful crown of creation, not fully explored, but manifested in a variety of forms).

From the upper left corner to the lower right corner

The task of the Gods on Earth is to comprehend the unknown and, condemning it to form, to create new images as a tool for cognizing all that exists.

From the upper right corner to the lower left corner

The union of people with God in a single spiritual impulse expands the capabilities of a person in the process of cognition.

1. The Earthly Gods cognize the plan of the Heavenly Gods and spread the wisdom about Good in all its manifestations. 2. They connect people with the Universal flow, thus harmonizing their life with the Earth, as a part of the Universal form. 3. A person connected to the Stream, exchanging his knowledge and experience in dialogue with other people (and worlds), as well as using the knowledge and experience of his predecessors, comprehends Being and creates thought forms (new concepts). 4. The final result of creativity must maintain harmony in the World, be truthful and sincere. Only such a result brings us closer to the Divine idea. 5. Striving to the higher, a person transforms the living space around him, makes it beautiful, expands its boundaries and learns its depth, thereby creating the life that God has ordained for us. 6. The variety of images transmitted to us by our ancestors is an instrument of cognition of all that exists, which goes beyond our perception, including the relationship of the Earthly and Heavenly structures. 7. Cognition of the new, through cutting off the unnecessary, spiritual development, love for Nature and awareness of oneself as a part of it – this is what you need to do in life. 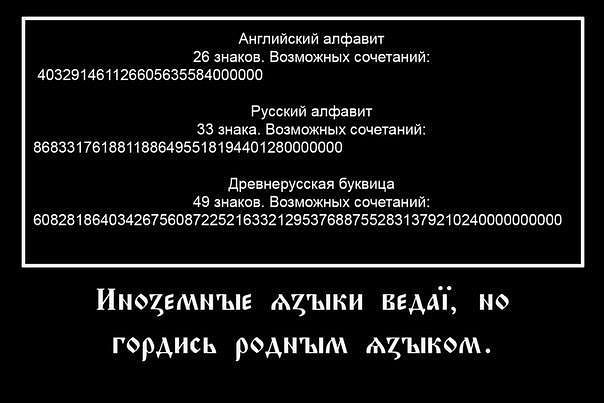 As we have already been able to make sure the Russian (ideal volumetric 7×7 matrix) language is the fruit of divine construction (design), and not the result of the spontaneous development of the inarticulate speech of a savage or a monkey. From all of the above, an unambiguous conclusion follows – in the history of mankind there has never been a pre-written period of development (“Palimpsest of the Gods“).

We hope that now you understand why the “great reformers” from “God’s chosen” people (Lunacharsky, etc.) circumcised the entire Russian people? The conclusion is more than obvious: by shortening the Bukvitsa, the “reformers” hoped to cut off part of the ancestral memory of the descendants of the White Gods. 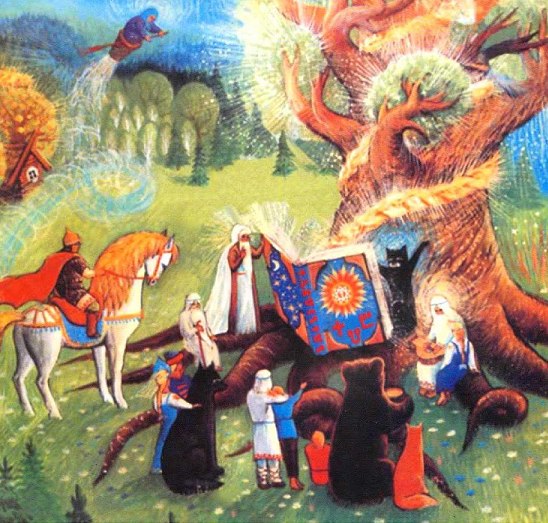 It is known that children need to be educated not by sciences, but with the help of language – living and creative, which contains all the necessary information about the world, nature, and the laws of the universe. Let us, at least from time to time, plunge into the world of the living Russian (Old Russian) language. The ancestral memory has not gone anywhere, it is embedded in the genes, in the blood. The time will come and under certain conditions the generic memory will manifest itself.

Wake up brothers and sisters!

Alexander Sukhinin (Director of the Intelligence Center of ISED)