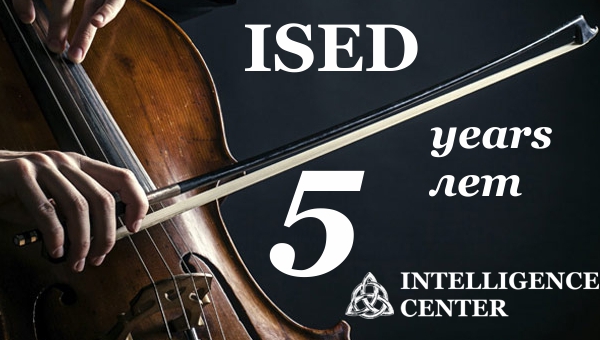 Results of summing up the results of 5 years of ISED work
(from the Minutes of the General Meeting of January 15, 2021)

– The decision to establish the Institute and approve the Statute was taken at the founding meeting on October 27, 2015.

– In September 2015, the official ISED website (www.isedworld.org) was created.

– The Ministry of Education and Science of Ukraine, based on the decision of the Attestation Board dated December 15, 2015, Stanislav Dubikowski, Director and co-founder of ISED, was awarded the scientific degree of Doctor of Philosophy (PhD). S. Dubikowski successfully defended his thesis in the specialty Economic security of the state on the topic “Economic security of the state in the development of the information society.”

– On December 21, 2015, the Institute’s Cooperation Agreement (ISED) was signed with the International Cultural and Educational Association (ICEA, Chicago, USA).

– The Institute was officially registered on January 15, 2016, Certificate No. 1452951. According to the Extract from the Unified State Register, the identification code of the legal entity: 40247645.

– since May 2016 – partnership with the “Ukrainian-American Association of Higher Education Workers” (UAACE).

– In June 2016 ISED was confirmed as a non-profit organization.

– In July 2016, the ISED website (www.isedworld.org) was restyled and switched to the WorldPress platform.

– The Scientific Council approved the beginning of the development of the information-analytical “Expert system” “Topic.sirius”.

– On July 10, ISED held a Workshop at the light hotel & hub (Kiev) on the topic: “Is it any life outside Manhattan?”. The speaker was Vladimir Vainshtok (USA), DrSc in Applied Mathematics, MBA in Finance and Insurance, who has worked on Wall Street for more than 15 years in companies such as Morgan Stanley, Credit Suisse, etc.

– On August 23, 2017, ISED together with UAACE held a Round Table on the topic of the development of higher education at the “light hotel & hub”: “Paradigms of modern American and Ukrainian higher education. Educational and teaching experience of Ukrainians at Georgia State University (Atlanta, USA).

– The Academic Council of January 6, 2018 made a decision to open and conduct an initiative research work (R&D) “Research of the characteristics of the information space created by news streams of electronic media.” Oleg Khatyan was appointed the responsible manager. Performers – Stanislav Dubikowski, Alexander Sukhinin.

– In June 2018, the Institute, within the framework of the development of the “Expert System”, successfully completed research work on the topic “Research of the characteristics of the information space created by news streams of electronic media”.

– The Scientific Council of the Institute considered and adopted the Report (final) on the results of the research (Protocol No. 1 dated June 07, 2018).

– R&D is officially registered and carried out through the UkrІNTEI system. State registration number: 0118U100003.

– ISED is officially registered in the databases of the US State Department, NATO and the European Commission.

– The director of the Institute, Stanisl Dubikovsky, prepared the monograph “The End of an Epoh: The Fatal Choice of Humanity”. The monograph was recommended for publication by the Academic Council of the Institute (Minutes No. 1 dated January 23, 2019).

– On April 25, 2019, the monograph was published in full-color A5 format in English, German and Russian.

The book of Stanislav Dubikowski received positive reviews from many international leaders and diplomats, including: Andrzej Duda (President of Poland), Alexander Kwasniewski (Vice President of Poland), Jacek Czaputovich (former Minister of Foreign Affairs of Poland, Director of the Diplomatic Academy of the Ministry of Foreign Affairs in Warsaw) , Victor Orban (Prime Minister of Hungary), Guillaume Shearer (ex-ambassador of Switzerland to Ukraine), Claude Wild (ambassador of Switzerland to Ukraine), diplomats from Germany, France, Austria, USA, Turkey, Libia, Pakistan, India, representatives of World Bank and many others.

– from 23 to 24 May 2019, ISED acted as a co-organizer, and the Director of the Institute Stanislav Dubikovsky became a member of the Scientific Committee of the 1st International Scientific Conference “Euro-Atlantic Security and Politics of the Russian Federation. Threats to Security in Central and Eastern Europe”(Piotrkow Tribunalsky, Poland). Conference organizers: Center for European Policy Analysis (CEPA) in Washington (US), Faculty of National Security of Jan Kochanowski University in Kielce (Poland), Baltic Defense College in Tartu (Estonia) and Czech Technical University in Prague.

– The Academic Council and the General Meeting of August 27, 2019 made a decision to reorganize: the Department of Strategic Analysis is abolished, and a consulting and analytical division – Intelligence Center – is created at the Institute. Center Director – Alexander Sukhinin. A decision was also made to introduce into the Center the Department of Information Support Systems, headed by Director Oleg Khatyan.

– in September 2019, Stanislav Dubikowski, as one of the candidates for the post of Director of NABU in March 2015, was invited by the co-founder of the International Vigilance Committee (anti-corruption supervision). Website: https://intvc.org/en/home//

– in December 2019, Deputy Director of the Institute Svetlana Tkalenko defended her doctoral dissertation at ChNTU (Chernigov) and received the scientific degree of Doctor of Economic Sciences (Doctor of Science, Dr.Sc). The topic of the dissertation is “Strategy of ensuring investment security of Ukraine in the conditions of European integration”.

– in February 2020, the Institute, in continuation of the research work “Research of the characteristics of the information space created by news streams of electronic media”, developed the analytical system “Topic.sirius”, which allows collecting and analyzing data circulating in the information field, as well as evaluating sources, who distribute it.

– On June 21, 2020, the Director of the Institute Stanislav Dubikowski prepared and published in full-color A5 format a fundamental work on the history of the Earth and mankind “Palimpsest of the Gods: The Secret Revealed.”

– dozens of scientific and popular science articles were published by the Institute staff throughout the year.

– The Academic Council and the General Meeting of January 15, 2021 made a decision to extend the powers of the Director of the Institute Stanislav Dubikowski and Deputy Director of the Institute Svetlana Tkalenko for a period of 5 years. It was also decided that if, at least one month before the end of the term of office, none of the parties announces the termination of cooperation, the powers are considered extended for the same period.